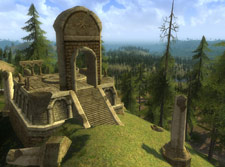 One of many vistas to explore in Middle-Earth.

Have you ever dreamed of traveling through Middle-Earth? Of exploring the Misty Mountains, strolling through the Shire, or fighting your way through a mass of Urak-hai? Your chance has finally come, in Turbine’s Lord of the Rings Online: The Shadows of Angmar, a massively multiplayer online role-playing game (MMORPG), in which you are given the opportunity to play as any of the “good” races in Tolkien’s master work.

There have been many Lord of the Rings games that have been released in recent years, pushed out to take advantage of the hype caused by the recent movies. Some of them have been worthwhile, but most have been poorly made products that bore little resemblance to their source material, or that offered little in the way of fun gameplay. The greatest concern of many Tolkien fans is that his memory and his work not be cheapened. While visiting the Turbine offices this last week to preview the game, I was assured by Jeff Anderson, their President and CEO, that their greatest desire was to “bring Tolkien’s world to life”, and that all of the developers had put “an enormous amount of passion into the game.”

Having said that, there will, of course, be some changes in the game necessary for gameplay reasons that a Tolkien “purist” is not going to love – but most of us have learned to enjoy the movies as one interpretation of the books; this game is merely another imagining of Tolkien’s world – one that you and your friends can actually interact with! 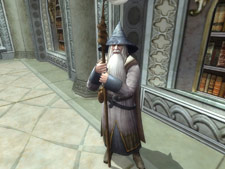 The game takes place during the events of The Lord of the Rings, and as your character is just starting out, Frodo and Sam have left the Shire. The Witch-King is marshalling forces in Angmar, with plans to overrun Eriador. Your goal is to fulfill quests to improve your character, destroy his minions, and help save the people of Middle-Earth from the forces of evil. As you are working against the Witch-King, and your character advances, the main story arc of the Fellowship also progresses, and in game scenes inform you of their progress. You also have the opportunity to interact with some of the members of the Fellowship, and may receive quests from them as well.

When the game first releases, players will be limited to the region known as Eriador. This will include such well-known areas as the Shire, Bree, and Rivendell. You will be able to explore Tom Bombadil’s house, travel to Weathertop, or even poke around Bag End. Over time, the developers plan to add more regions to the map, such as Moria, Rohan, and Gondor.

The races available for play are male or female Elves, Humans, or Hobbits. You may only select male Dwarves. You have a great deal of control when it comes to your character’s appearance, as far as hair color, eye color, face, etc.

The classes are split into seven different types: 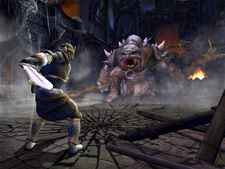 An example of in-game battle.

Champion: a fast paced fighting class.
Guardian: a tough, hard to take down fighting class.
Captain: a heroic leadership class.
Burglar: a tricksy class, full of cunning.
Hunter: excellent with the bow.
Minstrel: uses song to inspire others.
Lore-Master: uses arcane knowledge as the source of his power.

Each class comes with its own specific set of skills and abilities, and all of them are worth playing. Turbine has more information on the races and classes on their website.

We’ll take a look at some of the monsters that you fight in the game, Guilds (called Kinships), and Player-versus-Player.

LotR Online: Shadows of Angmar launches on April 24, 2007. Pre-ordering the game will give you special pricing ($9.99 a month, instead of the regular $14.99 a month, or you can buy a special lifetime membership for $199). You will also get special in-game items not otherwise available. You can pre-order here.