~Easterling~
"Wicked men. Servants of Sauron. They are called to Mordor. The dark one’s gathering all armies to him."

Index
Home » Literature Articles » The Silmarillion » 3. Of the Beginning of Days

3. Of the Beginning of Days

– Tulkas, the last of the Valar to enter Middle-earth, came to the world during the First War before Arda was fully formed.
– He came into Middle-earth laughing, and his anger passed before him like a mighty wind, scattering cloud and darkness before it.
– Melkor fled before him and left Arda for a long age. He brooded in the outer darkness, and after that, forever hated Tulkas.

The Lamps of the Valar / The Spring of Arda

– The Valar eventually brought order to the seas and the lands, then made their first dwelling in the Isle of Almaren, in the land of Middle-earth.
– Aulë made two great lamps which they set on high pillars and put one (Illuin) in the north of Middle-earth and one (Ormal) in the south. The lights met and blended over the Isle of Almaren.
– Yavanna planted seeds in the earth which eventually sprouted to become all sorts of plants and trees. Animals also came forth. But no flowers bloomed, and no bird sung – for those things were to come later. This time of blooming was known as the Spring of Arda.

The destruction of the Lamps

– Eventually the Valar rested from their labours, and Manwë ordered a great feast. At that time both Aulë and Tulkas were weary, for their skills had been used constantly during the Valar’s labours. At the feast, Tulkas married Nessa, and then slept.
– While the Valar were rejoicing, Melkor gathered his forces in the darkness. When Tulkas, his enemy, was asleep, Melkor came back to Middle-earth and started building Utumno, his great underground fortress in the far north of the world.
– Evil flowed from the fortress, corrupting the plants and animals Yavanna had created, and then Melkor suddenly came forth to war and destroyed the Lamps of the Valar, leaving the world in twilight.
– During the Lamps’ destruction, the lands were broken and the seas rose in tumult. Fire spilled out over the world, and the first designs of the Valar for the shape of Arda were forever spoiled.
– Melkor then fled back to Utumno after his work, and hid there. The Valar at that time could not overcome him, for most of their strength was being taken up by subduing the writhing and shaking of the Earth.
– Thus ended the Spring of Arda.

The creation of Valinor

– The Isle of Almaren in Middle-earth was destroyed, and the Valar went back to Aman (the Blessed Realm). They created a new domain for themselves, and called it Valinor. The city within Valinor they named Valmar.

“Behind the walls of the Pelóri the Valar established their domain in that region which is called Valinor; and there were their houses, their gardens, and their towers. In that guarded land the Valar gathered great store of light and all the fairest things that were saved from the ruin; and many others yet fairer they made anew, and Valinor became more beautiful even than Middle-earth in the Spring of Arda; and it was blessed, for the Deathless dwelt there, and there naught faded nor withered, neither was there any stain upon flower or leaf in that land, nor any corruption or sickness in anything that lived; for the very stones and waters were hallowed.”

– The land of Aman was the westernmost of all the lands of the world, and its west shores looked out onto Ekkaia, the Outer Sea, which encircled the Kingdom of Arda. Its eastern shores looked across Belegaer, the Great Sea of the West, towards Middle-earth.
– The Valar raised a mountain range known as the Pelóri on their eastern shore as defence against Melkor, and Manwë built his throne upon Taniquetil – the highest of those mountains.

The creation of the Two Trees 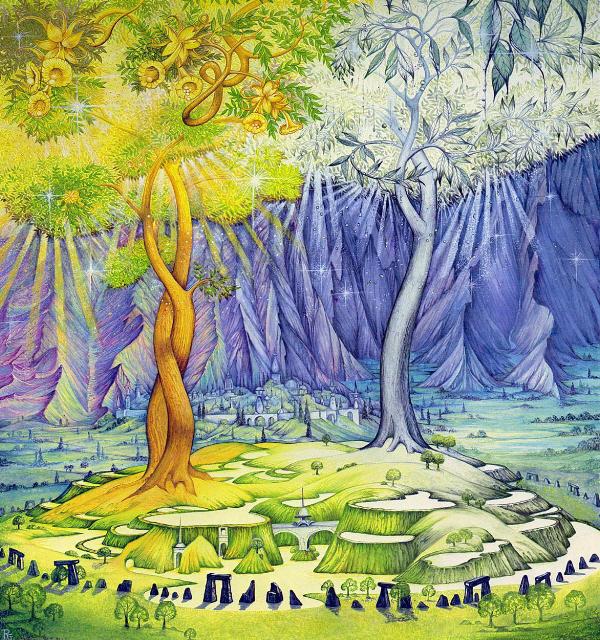 – Yavanna and Nienna created the Two Trees of Valinor – Telperion (the elder; shining silver and dark green leaves) and Laurelin (the younger; golden flowers), and when they started flowering, Varda collected their dews in large vats and the light of the Trees lit the land of the Valar.
– The Days of the Bliss of Valinor started with the creation of the Trees, as did the Count of Time.

Meanwhile, back in Middle-earth …

– Even when Aman had the light of the Two Trees, Middle-earth lay under twilight for many ages.
– In the darkness, Melkor walked abroad, creating cruel and violent creatures, wielding cold and fire from the tops of the mountains to the depths of the earth.
– The actions of the Valar:

– Though Manwë kept a watch on Middle-earth from his throne on Taniquetil, and his eagles and hawks brought him news of everything that came to pass in Arda, still some things of Melkor’s designs were hidden from him in the darkness of Utumno.
– From the early days onwards, Ulmo did not live in Valinor, instead threading himself through the oceans from where he could govern the movements of all waters in Aman. Through the darkness of Middle-earth, it was the power of Ulmo that maintained life and hope even when Melkor’s darkness and suffocation threatened to kill the land.
– Yavanna went forth often to Middle-earth to heal the land’s hurts, and would spend much time urging the Valar to go forth to war with Melkor.
– Oromë also rode at times in Middle-earth, hunting the creatures of Melkor and sending the darkness fleeing before him, if only for a short while.

What the Valar thought about the coming of Elves and Men

*important*
– The Children of Ilúvatar came into the Music during the Third Theme from the mind of Ilúvatar alone, and since the Ainur did not fully understand that Theme, they dared not add into their moulding. And because of that, the Valar were only ever the guardians and elders of the Elves and Men, rather than their masters.
– If ever the Ainur tried to force the Children when they would not be guided, the results were seldom ever good, however good the intent.
– Ilúvatar decreed that the elves would be the fairest of living creatures, and would have the greater bliss in Middle-earth, but to men he would give a new gift – that their hearts would seek beyond the world, and have the power to shape their own lives beyond the unravelling of the Music of the Ainur – which was as fate to everyone else.
– Associated with this new gift, Ilúvatar decreed that Men would remain alive in the world for only a short time. Death was the gift of Ilúvatar, for when Men die, they leave the world – something that through the ages of time, even the Powers would begin to envy.
– But while death was meant to be a gift, Melkor cast his shadow upon it, and confounded it with darkness, and turned good into evil and hope into fear.
– In contrast, Elves do not die until the world dies, unless they are slain or waste away in grief. Even then, they are simply gathered to the Halls of Mandos, from whence they may still return to the world. Ilúvatar’s purpose for the Elves after the end of Arda has never been revealed.