Demon of Might, Scourge of Fire, Demon of Power 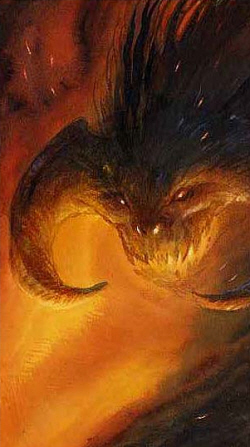 Balrogs were spirits of fire, that were corrupted by Melkor to become demonic beings of great size, with hearts were of fire, and cloaked in darkness. They had whips of flame. Balrogs were the first to adhere to him in the days of his splendour, and they were most like their master in corruption. They were the last of Morgoth’s servants to remain faithful to him and were courageous and confident.

In Tolkien’s original writings, Melkor made the Balrogs in Utumno, but he soon changed this having the Balrogs following Melkor to Middle-earth from the Blessed Realm. In Utumno he then multiplied his Úmaiar (~Maiar), chief of which were the Balrogs.

Balrogs evolved in both number and strength through Tolkien’s writings. Originally, they were capable of fear and pain, were present in huge numbers, and were clad in iron armour. The best description of them is in The Lord of the Rings: “It was like a great shadow, in the middle of which was a dark form, of man-shape maybe, yet greater; and a power and terror seemed to be in it and to go before it. It came to the edge of the fire and the light faded as if a cloud had bent over it. … Its streaming mane kindled, and blazed behind it. In its right hand was a blade like a stabbing tongue of fire; in its left it held a whip of many thongs.” Fire came out of its nostrils.

The number of Balrogs

The number of Balrogs present in Middle-earth is uncertain. Through most of the mythology, Melkor had a host of Balrogs at his command, numbering up to one thousand in the Book of Lost Tales. “others were creatures of pure flame that writhed like ropes of molten metal … and upon them rode Balrogs in hundreds.” However, some late notes state “There should not be supposed more than say 3 or at most 7 ever existed.” 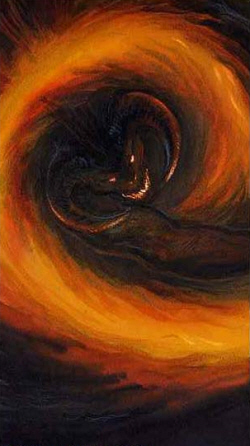 The weapons of Balrogs

The best known weapons of a Balrog are their swords and whips of flame which “whined and cracked”. They could emit evil, black vapours. However, in the Book of Lost Tales, they also had claws of steel, and the ability to shoot darts of fire and flaming arrows, which flew like “small snakes” into the sky.

Lord of the Balrogs. Tolkien originally envisioned Gothmog to be the son of Melkor and either the giantess Fluithuin or Ulbandi, but he abandoned that idea when he scrapped the notion of children of the Valar. His name meant ‘Strife-and-hatred’ in the Noldorin tongue. In the Orc tongue, Gothmog would translate to something akin to the Voice of Morgoth. Another name for Gothmog was Kosomot / Kosomoko. He slew Fëanor, Fingon and Ecthelion, and captured Húrin.

Balrogs freed Morgoth, their master, from the webs of Ungoliant in Lammoth, sending her into hiding. They followed Glaurung in Dagor Bragollach, the Battle of Sudden Flame. However, Balrogs are best known from the Fall of Gondolin, where Ecthelion killed three Balrogs, including Gothmog, Tuor killed another five, and two score were slain by warrior’s of the king’s house. Another Balrog was later slain by Glorfindel.

Balrogs in the Third Age

Some Balrogs survived the overthrow of Morgoth by hiding in inaccessible caverns at the roots of the earth.

“[The Balrogs]were supposed to have been all destroyed in the overthrow of Thangorodrim … But it is here found … that one had escaped and taken refuge under the mountains of Hithaeglin.”(Letters of JRR Tolkien, no 144)

The Balrog of Moria was then discovered by the Dwarves: 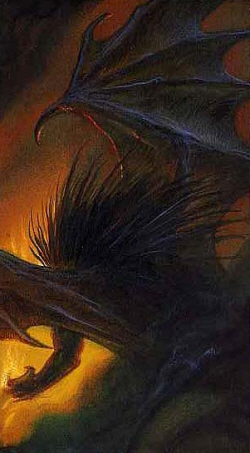 “The Dwarves delved deep at that time … Thus they roused from sleep a thing a terror that, flying from Thangorodrim, had lain hidden at the foundations of the earth since the coming of the Host of the West: a Balrog of Morgoth.”LotR, Appendix A(iii). The associated footnotes reads ”Or released it from prison; it may well be that it had been already awakened by the malice of Sauron.”

When the Dwarves awoke the Balrog, it killed Durin and Náin. The creature met his nemesis many years later, however, when the Fellowship once again woke it while walking through Moria. Even though it succeeded in pulling Gandalf off the Bridge of Khazad-dûm, the Balrog was slain in the ensuing battle.

The big question: did Balrogs have wings?

This question is likely never to be answered fully. There is little actually said on the subject in the books, and what is written is shown below:

”in C [a version of the manuscript] ‘the Balrog halted facing him, and the shadow about him reached out like great wings’. Immediately afterwards, when in FR the Balrog ‘drew itself up to a great height, and its wings were spread from wall to wall’, neither B nor C … speaks of the wings.”The Treason of Isengard

His enemy halted again, facing him, and the shadow about it reached out like two vast wings.”

”Its wings were spread from wall to wall”

To me, it seems more likely that they don’t have wings. Nearly everything I’ve read suggests that the wings were shadows cast by the body of the Balrog. A full discussion of this issue is available in this article ‘Balrogs-Flying High?’.