Eagles- The Eyes of Manwë 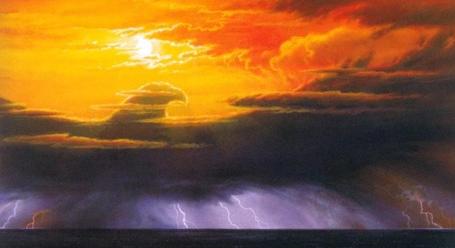 Before the stars were rekindled and the elves and humans awoken, Manwë and Yavanna, two of the most powerful Valar created the Eagles of Arda, one of the wisest races known to Middle-earth.

Throughout the Ages, these great birds served Manwë as his eyes throughout Arda, and they were his servants that carried out his will to all corners of Middle-earth and Aman.

During the First Age of the Sun, Manwë’s eagles perched in the Encircling Mountains in Beleriand. Upon the peaks called Crissaegrim they nested.

In that time, Thorondor was Lord of the Eagles, largest eagle known to Arda. His wing-spread was 30 fathoms and was faster than any wind. Thorondor saved Maedhros, Beren, Luthien, and the body of Fingolfin from Morgoth’s clutches. He, along with the other eagles, protected the Noldor city of Gondolin for centuries and fought the dreaded Fire-drakes of Morgoth.

During the Third Age of the Sun, Gwaihir, Windlord, ruled the Eagles of Middle-earth, where they had come to live when Beleriand was flooded. Gwaihir, along with his brother, Landroval, and Meneldor the Swift, saved Bilbo and the dwarves, fought in the Battle of the Five Armies, rescued Gandalf and the ringbearers, and fought the Nazgûl at the Black Gates.

Eagles: watchers and guardians, helping Middle-earth in its neediest times and showing that the Valar care for Iluvatar’s children.