~Gollum~
"Master betrayed us. Wicked, tricksey, false. We ought to wring his filthy little neck. Kill him. Kill him. Kill them both, and then we take the Precious and we be the master."

Faramir, Captain of the White Tower

Faramir was born in the year 2983 of the Third Age to Denethor II of Gondor, and Finduilas, daughter of Adrahil of Dol Amroth. The following year, Denethor’s father, Ecthelion II died and his son succeeded him as the Ruling Steward of Gondor. 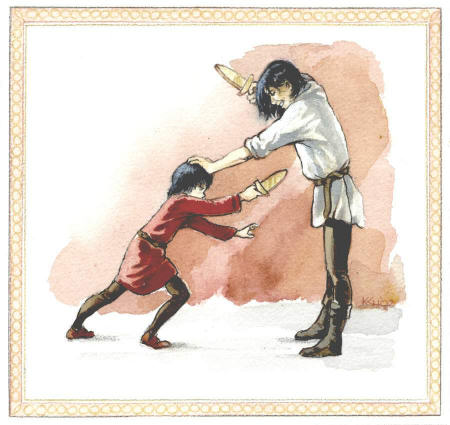 When Faramir was five-years-old, Finduilas died. Her death caused Denethor to become more somber, cold and detached from his family, while the relationship between Faramir and Boromir, who was by five years the eldest of the brothers, grew ever closer. Despite the obvious way that Denethor favoured Boromir over Faramir, there was no jealously or rivalry between them. Boromir protected and helped Faramir, and Faramir looked up to his older brother. Although the siblings were very similar in appearance with their dark hair and grey eyes, it was not so in personality. Boromir was defined to be the more daring one, as well as the more fearless and strong warrior. Faramir’s boldness was incorrectly judged to be less due to his gentle nature and love of lore and music.

It was this interest in lore that formed a friendship between Faramir and Gandalf the Grey, and Denethor’s youngest son learned what he could from Gandalf’s wisdom and mentoring. Denethor did not approve of Faramir as the “wizard’s pupil”, for he neither trusted or liked the Istar.

Captain of the Rangers of Ithilien

Faramir’s leadership, skill-in-arms, and swift but hardy judgment proved also to be handy on the battlefield. During the War of the Ring, he was the Captain of the Rangers of Ithilien, which consisted of the Dúnedain of the South belonging to the line of the Lords of Westernesse. Faramir valiantly defended Gondor from the Enemy, but did not enjoy fighting for war’s sake.

The night before the assualt of Osgiliath on June, 3018 T.A., Faramir had a prophetic dream of a voice speaking the following riddle:

“Seek for the Sword that was broken:
In Imladris it dwells;
There shall be counsels taken
Stronger than Morgul-spells.
There shall be shown a token
That Doom is near at hand,
For Isildur’s Bane shall waken,
And the Halfling forth shall stand.” 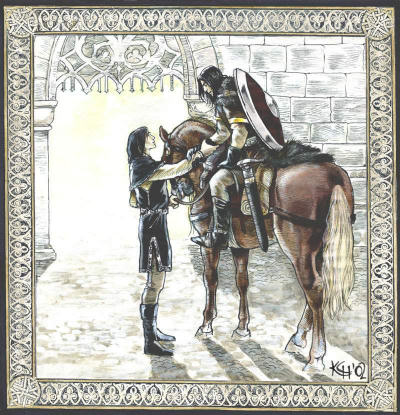 The dream came to Faramir twice more and once to his brother, and the brothers then told of their dream to Denethor, who only told them that Imladris was an Elvish name for Rivendell, home of Elrond and the Halfelven. Although Faramir had wanted to go for Gondor’s sake, Boromir, with the support of his father, claimed the right to the errand, deeming it to be dangerous and doubtful, and thus travelled nearly four months to Rivendell, arriving just in time for the Council of Elrond, where he reported the dream and its verses.

On February 29, 3019, Faramir, who was on guard duty, waded down to a boat floating down the Anduin river. To his grief, it was the dead body of his brother, which was pierced with many wounds.

During the battle with Southrons, Faramir, who took over his brother’s position as the Captain of the White Tower after Boromir’s death, encountered the Hobbits Frodo Baggins and Samwise Gamgee, recognising them to be the Halflings his dream spoke of. Faramir questioned Frodo about his quest, and Frodo revealed that he, along with eight other companions, had set out from Rivendell. During the interrogation, Faramir asked often about Boromir, especially concerning his fate, and of Isildur’s Bane, which Frodo was not too keen on talking about. Through intelligent questioning and intuition, Faramir determined that Frodo was carrying some great evil weapon of the Dark Lord of the Enemy. At this point, he showed the crucial difference between him and his proud brother:

“But fear no more! I would not take this thing, if it lay by the highway. Not were Minas Tirith falling in ruin and I alone could save her, so, using the weapon of the Dark Lord for her good and my glory. No, I do not wish for such triumphs, Frodo son of Drogo.”

In the Rangers’ secret refuge behind the waterfall, Henneth Annûn, Sam accidentally spoke of Boromir’s desire for the Enemy’s Ring, thus revealing the item Frodo was carrying. Despite the hobbits’ fears, Faramir was wise enough to realise that such a weapon was not to be used and if desired, should be resisted. With this knowledge, he also realised what his brother had to face, and wished that he had gone in his brother’s stead — knowing that Boromir would have wanted this ring in which he could bring glory and victory to Minas Tirith and himself.

Giving them provisions, he then sent them on their way to continue their quest, but warned Frodo both about Gollum being a treacherous creature and about the sleepless, dark, unknown terror in Cirith Ungol. 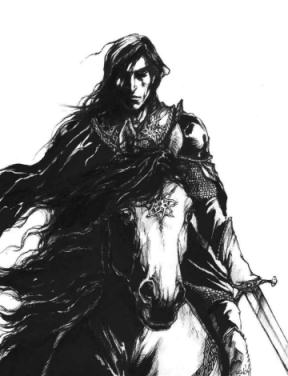 The following evening, Faramir sent his company south to reinforce the garrison at Osgiliath while he and three others of his men rode to Minas Tirith. Along the way, they were pursued by the Winged Nazgûl. Faramir, who was the only one horsed, rode back to aid the fallen. Immediately, Gandalf rode out to their aid, temporarily banishing the Nazgûl.

Arriving at Minas Tirith, Faramir reported his encounter with Frodo and Sam to Denethor and Gandalf. Denethor became angry that Faramir had not brought the Ring to Gondor, wishing that Faramir and his brother’s places had been reversed — since Denethor believed that Boromir would have brought the Enemy’s weapon to him.

Against the opinion of the rest of the Council, Denethor then sent Faramir to hold Osgiliath against the huge hosts of the Enemy. Although Faramir disagreed with his father’s strategy, he agreed to go, requesting that his father think better of him if he returned (to which Denethor coldly replied that it would depend on how he returned).

But the Witch-king, who led a vast force from Minas Morgul, overwhelmed the men of Gondor and won Osgiliath. Faramir, who decided to stay with the rearguard in order to make sure that the retreat over Pelennor would not turn into a rout, was gravely wounded by an arrow after the Ramnas Echor was breached. Fortunately, Gandalf and Faramir’s uncle, Prince Imrahil of Dol Amroth, rode to his aid and brought him back to Denethor.

Regretting that he had sent his son off to needless peril without his blessing, Denethor, after seeing in the palantír that the Ring would be captured, ordered his servants to build a funeral pyre for him and his son, who he believed to be poisoned by the Witch-king’s dart. Despite Peregrin Took’s protests that Faramir was still alive, Denethor continued with his madness and released him from his service.

Horrified, Pippin went to alert Gandalf and Beregond, one of the Tower Guards who loved his Captain enough to abandon his post and risk his life protecting him. They stopped the servants and Denethor from fully lighting the pyre, and then seeing that he could not win, Denethor jumped onto the lit pyre, burning himself alive.

Two days later, Aragorn came and revived Faramir with athelas in the Houses of Healing. It was not a poisoned dart of the Witch-king that wounded him in a state near death, but the arrow of a Southron, along with Faramir’s weariness and grief concerning his constantly strained relationship with his father and the Black Breath of the Nazgûl, who, under Sauron’s orders, hunted Faramir ever since he’d left Ithilien.

On March 20th, Faramir met the Lady Éowyn of Rohan in the House of Healing, and as they walked together in the gardens nearly everyday. Five days since their meeting, Faramir admitted his love to her after explaining that he understood her deathwish. There, Éowyn’s grief and desire for glory and greatness vanished, and she realized that she had come to love Faramir in return. Upon hearing this, Faramir kissed her, uncaring of whether or not the people of Minas Tirith could see this in full view. 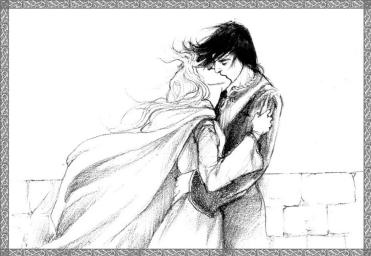 Faramir briefly served as a Ruling Steward, and began preparing the city for the King’s arrival. But on the day of the King’s official coronation, Faramir surrendered his office. Aragorn, however, announced that as long as his line would last, Faramir and his descendants would be Stewards of Gondor.

King Elessar appointed Faramir as the Prince of Ithilien and Beregond as the Captain of his guard, the White Company. As Prince of Ithilien, he and the Prince of Dol Amroth, Gondor’s two highest ranking nobles, became King Elessar’s chief commanders. His duties also included acting as resident march-warden of Gondor’s main eastward outpost, rehabilitating the lost territories, as well as clearing it of outlaws and orcs and cleansing Minas Morgul of evil-remnants. Faramir also fulfilled the traditional role as Steward, acting as the King’s chief counselor as well as ruling Gondor in the King’s absence.

With Éowyn, the two settled in Emyn Arnen, where the two had at least one son named Elboron, who succeeded him as Steward of Gondor, Prince of Ithilien, and Lord of Emyn Arnen, after Faramir’s death in 82 of the Fourth Age.