~Curufin~
Curufin was called "the crafty" and it was said that he "inherited most his father's skill of hand".

Finrod Felagund, Wisest and Fairest of the Noldor 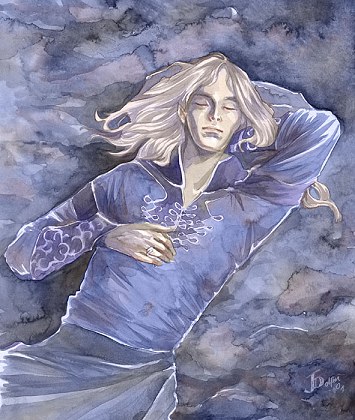 Finrod was the eldest son of Finarfin, son of Finwë, and of Eärwen, daughter of Olwë, King of the Teleri in Alqualondë. He was the eldest brother of Angrod, Aegnor, Galadriel, and of Orodreth (in the published “Silmarillion”), is described as having golden hair – a Vanyarin inheritance – and being among the fairest and noblest of the Noldor.

His Quenya father name was Findaráto, approximately translating as “Mighty descendant of Finwë”. His mother name was Ingoldo, which was never translated. Felagund was an epessë given to him by the Dwarves that expanded the caves in the rock beneath Taur-en-Fauroth, and built the stronghold of Nargothrond for him. It means “Hewer of Caves” and is apparently Sindarized Khuzdul.

Another name that Finrod bore was Nóm (“Wisdom”), and it was bestowed by Bëor and his followers. “The History of Middle-Earth”, volume 10, also mentions that “he was often called by the Eldar Edennil, ‘The Friend of Men’” (HoME, 10: 305). His other titles also include: King of Nargothrond and Lord of Nargothrond.

It is also worth noting that the name of Finrod was initially borne by his father in previous versions of “The Silmarillion” such as the “Annals of Aman” and the “Later Quenta Silmarillion”, while he was called Inglor. This name survives in Gildor Inglorion, the elf that Frodo and his companions met on their way to Crickhollow. Together with Gildor’s statement that he was “of the House of Finrod”, this has led to speculations that he was Finrod’s son. Yet whether this was the professor’s initial design and he failed to correct the name as he changed his mind, or whether Gildor is simply and more likely the son of a Nargothrond knight called Inglor, there is ample evidence to prove that they were not related.

One such proof is the fact that while still in Aman, Finrod was betrothed to Amarië of the Vanyar, who refused to join him in exile. And later on, when Nargothrond was full wrought and Galadriel came to stay with him a while, Finrod confessed her: “An oath I too shall swear, and must be free to fulfill it, and go into the darkness. Nor shall anything of my realm endure that a son should inherit.” (Silmarillion: 150)

According to certain sources, although not clearly specified, his birthday is set in the First Age, during the Years of the Trees, some time between 4780, the year his parents got married, and 4862 when Galadriel was born. Yet other sources indicate 1300 of the Age of the Trees as the year when Finrod and his closest friend Turgon were born. As an aside, they both received the same nickname, “the Wise” (or “Wisdom”), during their lives.

Initially, Finrod played a less active part in the Noldo rebellion than his more daring and eager sister, and sided with Finarfin and Turgon in opposing the departure from Valinor, marching at the rear of the host. He did not actively participate in the first Kinslaying, unlike Galadriel who fought for the Teleri. However, following the unfortunate events at Alqualondë, his father’s subsequent refusal to continue the march, and Fëanor’s betrayal, he resumed his place at the head of the remaining host, together with Galadriel and Fingolfin’s sons.

After his arrival in Beleriand and following a previous visit by Angrod as his envoy, Finrod and Galadriel spent years as guests of King Thingol and Queen Melian in Doriath, where they got closely acquainted with the lore, customs and politics of the Elves of Beleriand. In the year 30 of the First Age, when Finrod was traveling with Turgon southward along the Sirion, they spent the night beyond the Meres of the Twilight. 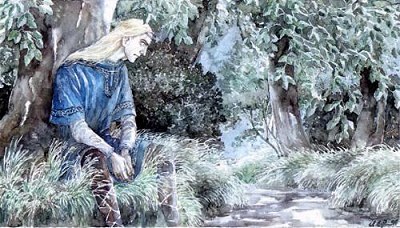 “But Ulmo coming up the river laid a deep sleep upon them and heavy dreams; and the trouble of the dreams remained after they awoke.” (Silmarillion:129)

Urged by the Vala’s warning and the inherent need to have a stronghold for himself (should Morgoth decide to burst from Angband and overtake the Noldorin forces in the North), Finrod took counsel with Thingol, who guided him to the caves under the High Faroth, on the river Narog’s western shore. There, aided by the Dwarves of the Blue Mountains, he built “deep halls and armouries after the fashion of the mansions of Menegroth”. (Silmarillion, 130) He received his epessë at that time, together with the most renowned work of the Dwarf smiths in the Elder Days: the Nauglamír (the Necklace of the Dwarves) that was later set with a Silmaril and brought about King Thingol’s death at the hands of the Naugrim.

Finrod’s realm was the greatest of the Noldor by far, extending:

“west of Narog to the River Nenning […]; and Finrod became the overlord of all the Elves of Beleriand between Sirion and the sea, save only in the Falas.” (Silmarillion: 137)

And if anyone wondered about some strange connection between Finrod and Minas Tirith, then it was him who founded the original tower bearing this name, which guarded the pass of Sirion and would later on be captured and ruled by Sauron until its destruction by Lúthien.

The Lord of Nargothrond also loved wandering into the wild and ventured often into Ossiriand, where he won the friendship of the Green-elves.

It was this fondness of wandering that would have him go hunting in the lands of Thargelion in East Beleriand, and thus he became the first of the Noldor to come across Men. He spent a long time with them, learning their language and customs, trying to get news of the Enemy’s dealings in the distant East, teaching them Sindarin and sharing Elven lore. He also intervened on behalf of the Laiquendi of Ossiriand, who feared that such a massive arrival of the Aftercomers (who seemed to quickly multiply their numbers) would destroy their homes, and he obtained Thingol’s permission to guide the Men to Estolad, where they would settle.

Besides Bëor, who would become his vassal and followed him to Nargothrond in his service, Finrod shared a close friendship with Andreth of the same House of Bëor, whom he often visited during the Siege of Angband, to debate with her on matters of Elves and Men. One such debate was recorded and preserved in writing, and became known as “Athrabeth Finrod Ah Andreth” (“The Debate of Finrod and Andreth” – HoME 10).

A passionate, highly argumentative and philosophical piece, set against a melancholy background, already tense with rumor of war against Angband, the Athrabeth presents the fundamental differences of nature, destiny and experience between the Children of Ilúvatar. It is infused with Finrod’s love for the Atani, and reveals his compassionate nature and desire to understand them and thus understand more about the Quendi:

“… when we name you ‘Children of Eru’ we do not speak lightly; for that name we do not utter ever in jest or without full intent. […] and we proclaim that you are our kin, in a kinship far closer (both in hröa and in fëa) than that which binds together all other creatures of Arda, and ourselves to them.” (HoME, 10: 308)

The increasing intensity of argument and Andreth’s bitterness reveal not only her love for Finrod’s brother Aegnor (and what should have been the first mixed marriage between Men and Elves) but also Finrod’s foresight of the doom beset on those who will try to bridge “the gulf that divides our kindreds”, as he put it when explaining Aegnor’s refusal:

“…he withdrew and did not grasp what lay at hand: Elda he is. For such barters are paid for in anguish that cannot be guessed, until it comes.” (HoME, 10: 324)

Such prophecy becomes bitterly ironic when one knows that it will be nonetheless Beren, of Andreth’s kinsmen, who will marry Lúthien, and taste together with her “both the sweet and the bitter”. (RoTK: 1276) 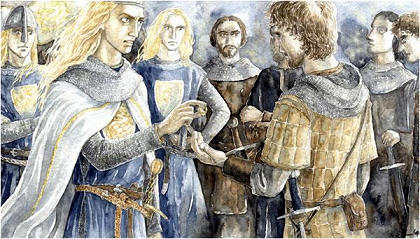 During the Dagor Bragollach, Barahir of the House of Bëor saved Finrod’s life, and in return the King of Nargothrond gave him his ring, which would become known as the Ring of Barahir, and passed down as an heirloom over three ages. When, years later, Barahir’s son Beren fell in love with Thingol’s daughter, he came to Nargothrond seeking help to retrieve a Silmaril from Morgoth’s crown and thus obtain Lúthien’s hand in marriage. At that time Celegorm and Curufin were dwelling in Nargothrond, and through barely veiled threats and crafty words, managed to dissuade Finrod’s people from accompanying him on the Quest of the Silmaril to repay his debt. Only ten warriors were to be found still faithful to their lord and, headed by Edrahil, they left Nargothrond with Finrod and Beren, only to be captured and imprisoned by Sauron on Tol-in-Gaurhoth (Isle of Werewolves and former Minas Tirith). There, they were killed one by one by Sauron’s wolves until only Finrod and Beren were left.

Finrod found his end in an epic fight with Sauron, where they both clashed in “wizardry” and “songs of staying” till, in the end, Sauron had the mastery and “Finrod fell before the throne”. (Silmarillion: 200-1) After wrestling and slaying the werewolf sent to kill them, Finrod died from the mortal wounds received.

Yet Beren and his line thrice revenged his sacrifice: when Sauron was cast away from his tower by Lúthien, when Isildur cut the Ring from his hand, and when his descendant Aragorn accompanied the Ringbearer and contended with Sauron ages later.

His body was buried on his own isle, thus purifying it of Sauron’s presence, and his grave remained ever green until the lands broke and changed after the War of Wrath.

“But Finrod walks with Finarfin his father beneath the trees in Eldamar.” (Silmarillion: 206)

The oldest son of Finarfin would always be remembered as the noblest of the Noldorin princes, the wisest and truest at heart, an advisor and loyal friend to the bitter end.

Researched and written by Nenya_Ring