Galadriel – Past, Present and Future

Galadriel is probably one of the most prominent and interesting elves of Tolkien’s world. Through different actions and circumstances we see her character change and grow over time. Galadriel is most known for her position in the Third Age, when she aids Frodo, giving him and the Fellowship honourable gifts fitting their needs. What many don’t know is the story behind, her history – what made her who she was and how she, one of few, was able to resist the Ring, even when offered to her freely. Despite her great contribution to the safety of Middle-earth and being said to be equal to Fëanor, we hear very little about her. However, the shaping of her character is significant in the story of Middle-earth. 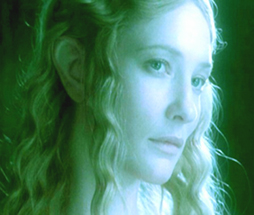 Galadriel grew up in the Bliss of Valinor before the Ages of the Sun began, and being the daughter of the Noldo/Vanyarin Finarfin and the Teleri princess Earwen, she had friendship with all the houses of the Eldar. However it was not long after she had grown to womanhood that the shadows of Melkor spread to the blessed lands and Galadriel was marked by it. Talented, wise and beautiful Galadriel had the potential of many things, though like many Noldor, she was proud and stubborn by nature, and not even her reverence for the Valar, nor her mild and generous nature could quell her desire to rule mighty lands in foreign areas of the world. A just wish it would seem, for among the Eldar her only equal was Fëanor whom she never thought of kindly.

In the turmoil of the killing of the Two Trees and the theft of the Silmarils that followed, Galadriel departed with the Noldor from Valinor. She had no part in the kinslaying and had left only to claim lands of her own and to hinder the work of Fëanor wherever she might. For this reason, she followed Fingolfin across the Helcaraxë rather than cross by the stolen ships of the Teleri with Fëanor. It was the Grinding Ice that first taught her of the hardships that awaited the Noldor in Middle-earth, but the exiles felt as well the first bitter taste of the Doom of Mandos.

After her arrival in Middle-earth, Galadriel went to dwell with the elves of Doriath. There she had favour with Melian and Thingol, the rulers of Doriath, who had accepted her into their realm because of her kinship with Thingol. There she learnt much and her relationship with them grew. Especially with Melian the Maia, with whom she discussed the bliss of Valinor and also shared with her the things that had passed there. However she never revealed the kinslaying or the oath of Fëanor. Melian taught Galadriel much of Middle-earth’s history and lore and Galadriel gained much wisdom from this friendship. However it is likely that the full understanding of these things came to her first as she found herself in different circumstances during the many years that followed.

While living in Doriath she became acquainted with Celeborn, a prince of the Sindar, and they fell in love. Her love for Celeborn caused her to dwell in Doriath longer than first intended and the two were wed. A problem created by this long dwelling in Doriath was that Galadriel never found a land to rule and therefore when Morgoth’s rule was finally overthrown, she was still not ready to leave Middle-earth. So, ignoring the pardon of the Valar, she went with Celeborn to dwell in the eastern parts of Middle-earth.

In the First Age we see Galadriel’s character beginning out as one of ambition, pride, spontaneity and self-confidence in her travelling to Middle-earth against the will of the Valar. However, despite an obvious wild and reckless nature during the First Age, Galadriel is also a warm-hearted person to whom people turn to confide in, as she is gentle and kind and doesn’t judge others. We see her courage as she does not back down, and also loyalty to her people, as she doesn’t betray their actions to Thingol, even though she knows they were wrong. Looking closely, we can see her character changing ever so slightly mainly due to the influence of Melian and Galadriel’s own realisation that Middle-earth isn’t quite like she first thought. She had never experienced armies of Morgoth attacking the lands before. Melian’s influence greatly affected Galadriel as she saw a strong female ruler, this probably encouraged her all the more to rule her own land, but seeing a positive example equipped her better for the task. It’s said that Galadriel was the only female to stand with the princes on the day the Noldor left Valinor, and her mother’s name for her, Nerwen, meant man-maiden. Melian, however, taught her that a female could also rule in partnership with a male.

Not much is known of Galadriel’s doings in the Second Age, except that her friendship with Celebrimbor bloomed, to the degree that he fell in love with her and later gave her one of the Rings of Power and also took counsel with her about the fate of his other Rings. Not finding the strength to destroy the lesser Rings of Power, Galadriel advised that the Three be given to guardians and not be used; it was at that time she received Nenya, the Ring of Adamant. These Rings had the power to ward off the decays of time and postpone the weariness of the world. Also it was sometime during this Age that Celebrían was born and that Galadriel and Celeborn settled themselves east of the Misty Mountains as Guardians of the Woodland Realm Lothlórien, where Elves of the Nandorin race dwelt. By the wisdom of Galadriel, her power and the Ring she guarded, Lothlórien grew beautiful and wondrous, a place where time was not felt, for it was the desire of Galadriel to make the realm alike to that of the Vala Irmo. Galadriel also formed a relationship with the dwarves, despite Celeborn’s hatred toward the race for their part in the destruction of Doriath.

During the Second Age we see Galadriel’s character remaining fairly similar to that of the First Age, as people feel they can confide in her. The Ring of Adamant brings out a strong sea-longing in her and we see that when she finally has the chance to rule a land of her own, she chooses rather to become a guardian, leaving her options open to return to the West. She also shows wisdom in that she doesn’t despise the dwarves living nearby, but sees them as allies against Sauron.

In the Third Age, confident of her own wisdom and power, Galadriel summons the White Council to discuss Sauron and other important matters. She wishes for Gandalf to become the leader of the council, but her wish is not granted. It is as if this event has made her draw back even more from the world, to let things happen as they might – concentrating all her power on Lothlórien, which she thinks will be her last home on Earth, believing the ban of the Valar still to be on her.

This realm however she governs with much care and she is revered by her subjects and admired by many, though the land of Lothlórien has got a reputation of doing odd things to those who enter it. She lives a quiet life there, having much time to herself and her thought, and ever aware of Sauron, she battles with herself and with him about the Ring and the will to use it. Only when Frodo and the Fellowship enter her land is she once again forced to face reality. She proves herself a reliable and supportive ally and aids them wherever possible. It is at this time that she rejects the One Ring, though it was offered freely and would have given her all she had longed for in her youth. 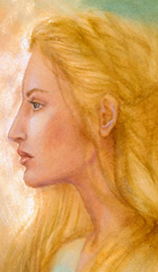 In the Third Age we see a dramatic change of character (that no doubt has come to the surface after her many challenges). She is wise and regarded as this by many. Those around her feel comfortable talking to her and expressing their fears. She offers encouragement to many that would be considered weak by others. Finally she passes the final test of everything she has ever longed for. The Ring of Power comes within her grasp and in her wisdom she rejects it, freeing herself from the lust of power that had been evident for so long in her youth. In the Second Age she lacked the strength to destroy even the lesser of the Rings of Power, however, she grew in wisdom and offered encouragement and support to those who wished to destroy the One Ring. She is also quite selfless in this act, as her own Ring, the Ring of Adamant, will no longer have power, and the beauty of the elves will fade.

Even after Galadriel has lost all her Middle-earthly possessions and all chances of staying there, she still tries to create the best atmosphere for a positive future there, which is seen in the way she discusses the future of Middle-earth with Elrond, Gandalf and Celeborn. This is also shown in the way she encourages Aragorn to take up the throne of Men, securing a strong ruler who will oppose any darkness that may arise, as well as restore the strength of Men in Middle-earth. Selflessly, she doesn’t discourage his relationship with Arwen, but is even seen to encourage it by giving him the Elessar jewel in Lothlórien.

It is obvious from all this that Galadriel’s character goes through a great development from the First to the Third Age, starting out as ruthless and ambitious, wanting lands of her own and people to rule over. However she ends a wise lady of much power – yet of a different kind then what she had longed for in her youth. Her power helps others achieve their goals and protect Middle-earth. After this is accomplished, she has fulfilled her fate in Middle-earth and can return once more to the West.