~Thrór's Map~
"This was made by Thrór, your grandfather, Thorin," he said... "It is a plan of the Mountain."

Gil-galad – High King of the Noldor

Surprisingly enough, not much is told about the life of Gil-galad. After the Dagor Bragollach, he was sent to live with Círdan, and he became High King of the Noldor in Exile after Turgon’s death.

After the breaking of Beleriand, he remained King and lived in Lindon with his people, those Eldar who were reluctant to leave Middle-earth where they had fought and laboured so long. With him remained Elrond and Elros. 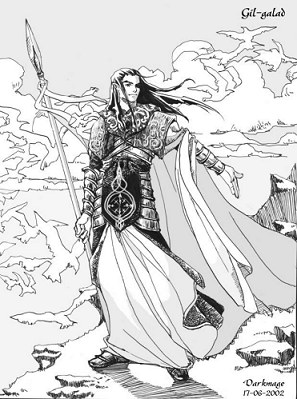 When Sauron set out to ensnare the inhabitants of Middle-earth, it was only to Lindon that he dared not go, for Gil-galad and Elrond both doubted his intentions, though they did not know who he was exactly. They also sent messengers to the other elves warning them about Annatar, but the messages were seldom heeded. Sauron, in an echo of Morgoth causing trouble between Fingolfin and Fëanor, told the other elves that:

“A mighty King is Gil-galad, and wise in all lore is Master Elrond, and yet they will not aid me in my labours. Can it be that they do not desire to see other lands become as blissful as their own? But wherefore should Middle-earth remain for ever desolate and dark, whereas the Elves could make it as fair as Eressëa, nay even as Valinor?” (Silmarillion, Of the Rings of Power and the Third Age)

The power of Gil-galad remained strong in Lindon while the rest of Middle-earth fell under the wiles of Sauron. And, when Sauron returned from Númenor, he even found that Gil-galad’s power had increased, spreading over wide regions of the north and west, beyond the Misty Mountains and the Great River, even to the borders of Greenwood the Great.

When the Faithful sailed out of Númenor, Elendil was cast up in Lindon, and befriended by Gil-galad. Towards the end of the Second Age, they made a league called the Last Alliance – Men and Elves united to stop Sauron before he became too strong.

In the ensuing battle, all the Elves followed Gil-galad, and the host of the Last Alliance had the victory, with none of the enemies being able to stand against Aeglos, Gil-galad’s spear. Then Gil-galad and Elendil passed into Mordor, and laid siege to the stronghold of Sauron for seven years. After that, Sauron himself came forth onto the slopes of Orodruin, and wrestled with Gil-galad and Elendil. Both were slain.

(For a fuller account of the War of the Last Alliance, see the Elrond’s Library article here.)

The Fall of Gil-galad

The Fall of Gil-galad was remembered in a song sung to the Fellowship by Samwise Gamgee:

Gil-galad was an Elven-king.
Of him the harpers sadly sing:
the last whose realm was fair and free
between the Mountains and the Sea.

His sword was long, his lance was keen,
his shining helm afar was seen;
the countless stars of heaven’s field
were mirrored in his silver shield.

But long ago he rode away,
and where he dwelleth none can say;
for into darkness fell his star
in Mordor where the shadows are. (Fellowship of the Ring)

The parentage of Gil-galad

The parentage of Gil-galad is fairly enigmatic. The Silmarillion says that his father was Fingon son of Fingolfin, but Christopher Tolkien readily explains (in the Shibboleth of Fëanor, Peoples of Middle-earth) that this was an error due to the incredible complexity of the source material:

“Gil-galad as the son of Fingon… was an ephemeral idea.” (Shibboleth of Fëanor, Peoples of Middle-earth)

Tolkien changed his mind about Gil-galad’s ancestry several times, originally supposing that he was the son of Finrod Felagund. This idea remained foremost through the time of the writing of The Lord of the Rings, as can be seen in an addition to the Quenta Silmarillion where it was told that Finrod send away his wife and son Gil-galad from Nargothrond to the Havens. However, when it was decided that Finrod had no wife, instead leaving his love Amárië in Aman (Grey Annals of 1951), Gil-galad’s parentage needed to be changed.

Enter Orodreth. Orodreth’s earliest incarnation was as the son of Finrod (named Artanáro Rhodothir). He was the second King of Nargothrond and the father of Finduilas. But when Amárië was created, Orodreth moved from being Finrod’s son to being the son of Finrod’s brother, Angrod. The name of Angrod’s son was then changed from Artanáro to Artaresto.

Tolkien’s last writing on the subject came from 1965, when he suggested that the best solution to Gil-galad’s parentage would be to have him as the son of Orodreth:

“Angrod’s son was Artaresto, who was beloved by Finrod and escaped when Angrod was slain, and dwelt with Finrod. Finrod made him his ‘steward’ and he succeeded him in Nargothrond. His Sindarin name was Rodreth (altered to Orodreth because of his love of the mountains .. ….. His children were Finduilas and Artanáro = Rodnor later called Gil-galad. (Their mother was a Sindarin lady of the North. She called her son Gil-galad.) Rodnor Gil-galad escaped and eventually came to Sirion’s Mouth and was King of the Noldor there.” (Shibboleth of Fëanor, Peoples of Middle-earth)

The final genealogy thus had Orodreth as the son of Angrod, and Gil-galad and Finduilas as the children of Orodreth. Gil-galad was thus the nephew of Finrod. About this decision, Christopher Tolkien said:

“There can be no doubt that this was my father’s last word on the subject; but nothing of this late and radically altered conception ever touched the existing narratives, and it was obviously impossible to introduce it into the published Silmarillion. It would nonetheless have been very much better to have left Gil-galad’s parentage obscure.” (Shibboleth of Fëanor, Peoples of Middle-earth)

References: The Silmarillion, The Fellowship of the Ring, Peoples of Middle-earth