Rivendell was situated to the west of the Misty Mountains, between the rivers Loudwater and Bruinen. 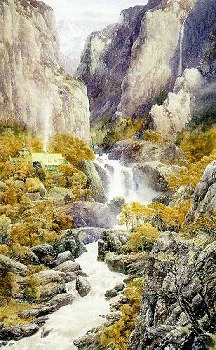 The book doesn’t make the layout or size of Rivendell very clear. However, there are hints, especially – quite bizarrely – about Bilbo’s bedroom.

Frodo’s bedroom: “the ceiling looked strange: it was flat, and it had dark beams richly carved. He lay a little while longer looking at patches of sunlight on the wall, and listening to the sound of a waterfall.” (Many Meetings)

Dining Hall: “Elrond … sat in a great chair at the end of the long table upon the dais … In the middle of the table, against the woven cloths upon the wall, there was a chair under a canopy [for Arwen]” (Many Meetings)

Hall of Fire: “they went across a wide passage and through other doors, and came into a further hall. In it were no tables, but a bright fire was burning in a great hearth between the carven pillars upon either side. … “This is the Hall of Fire,” said the wizard. “Here you will hear many songs and tales – if you can keep awake. But except on high days it usually stands empty and quiet, and people come here who wish for peace, and thought. There is always a fire here, all the year round, but there is little other light.” (Many Meetings)

Bilbo’s bedroom: “It opened on to the gardens and looked south across the ravine of the Bruinen. … looking through the window at the bright stars above the steep-climbing woods” (Many Meetings)

Bilbo’s bedroom: “the old hobbit pulled out from under his bed a wooden box [containing Sting and the mithril jacket]” (The Ring Goes South)

Bilbo’s bedroom: “It was littered with papers and pens and pencils; but Bilbo was sitting in a chair before a small bright fire.” (Many Partings)

“”a perfect house, whether you like food or sleep, or story-telling or singing, or just sitting and thinking best, or a pleasant mixture of them all.” Merely to be there was a cure for weariness, fear and sadness.” (Many Meetings)

“It’s a big house this, and very peculiar. Always a bit more to discover, and no knowing what you’ll find round a corner. And Elves, sir! Elves here, and Elves there! Some like kings, terrible and splendid; and some as merry as children. And the music and the singing” (Many Meetings)

“The feast was merry and the food all that his hunger could desire.” (Many Meetings) 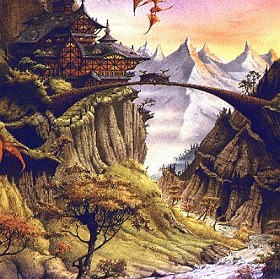 “and he gathered there many Elves, and other folk of wisdom and power from among all the kindreds of Middle-earth, and he preserved through many lives of Men the memory of all that had been fair; and the house of Elrond was a refuge for the weary and the oppressed, and a treasury of good counsel and wise lore.”

“storied and figured maps and books of lore that were in the house of Elrond.” (The Ring Goes South)

“A gleam of firelight came from the open doors, and soft lights were glowing in many windows.” (The Ring Goes South)

Outside the Last Homely House

“Sam led him along several passages and down many steps and out into a high garden above the steep bank of the river. He found his friends sitting in a porch on the side of the house looking east. Shadows had fallen in the valley below, but there was still a light on the faces of the mountains far above. The air was warm. The sound of running and falling water was loud, and the evening was filled with a faint scent of trees and flowers, as if summer still lingered in Elrond’s gardens.” (Many Meetings)

The porch described above was also used for the Council of Elrond.

“They crossed the bridge and wound slowly up the long steep paths that led out of the cloven vale of Rivendell; and they came at length to the high moor where the wind hissed through the heather. Then with one glance at the Last Homely House twinkling below them they strode away far into the night.” (The Ring Goes South)

“[The Bruinen] was flowing fast and noisily, as mountain-streams do of a summer evening, when sun has been all day on the snow far up above. There was only a narrow bridge of stone without a parapet, as narrow as a pony could well walk on” (The Hobbit, A Short Rest)

Also mentioned, though not described, are woods and a forge. 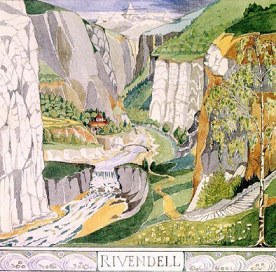 Rivendell is hidden away from view in a valley, but there is some land around the house. From a practical point of view, this makes sense – Rivendell had a good number of elves living there, and their food and supplies would have to come from somewhere, and it would be much easier to create as much production as possible in the Bruinen valley.

It was created as a refuge for elves fleeing from Sauron’s onslaught on Middle-earth, and for a good number of years, it had a mainly military function, and was besieged by Sauron’s army. Does this give a hint to the overall look of Imladris? Of course, the Last Homely House would evolve over time, but I would imagine that underlying any decoration that were added in times of peace, the underlying structure could well still be practical and defence-based.

Imladris really is a Homely House – its corridors full of elves, fires roaring, and laughter and song filling the air. The only place where it is said that contemplation and silence dominates is the Hall of Fire, when it was not being used for nights of song.

To many elves through the Second and Third Ages it was a place to rest, recuperate, sing and make music, glory in light and nature.

– The Silmarillion
– The Lord of the Rings