~Pippin Took~
"Don’t talk to it Merry, don’t encourage it."

She was a vassal of Ulmo, and the mate of Ossë. Together, they were given the government of the waves and the movements of the Inner Seas, and many other spirits beside. Her hair was spread out through all the waters under the heavens. She loved all the animals and plants of the sea, and the mariners cried out to her as she could lay calm upon the waves, restraining the violence of Ossë. 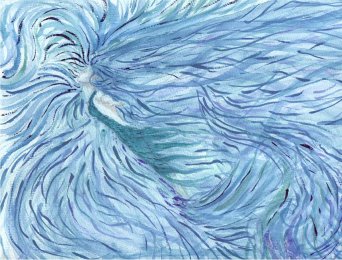 It was Uinen that restrained Ossë from his violence when Melkor was endeavouring to draw Ossë to his allegiance. She brought him before Ulmo, and Ossë was pardoned, and he returned to his original allegiance.

Both Uinen and Ossë befriended the Teleri, and after the Kin-slaying, Uinen wept for the slain, and raised up a great storm to confound the Noldorin ships. In Morgoth’s Ring Uinen helped Ossë teach the Teleri.

The Númenóreans held her in reverence equal to the Valar. Before the Downfall of Númenor and the Change of the World, she always travelled before the ships of their sea folk.
Uinen’s guardianship of the Númenoreans is shown in Meneldur’s speech to Eldarion in the Unfinished Tales:

“Do you forget that the Edain dwell here under the grace of the Lords of the West, that Uinen is kind to us, and Ossë is restrained?”

Whenever a ship set sail from Númenor to Middle-earth, it was tradition that a woman would set a bough of oiolairë on the ship’s prow, in token of their friendship with Ossë and Uinen. Uinen also gave her name by Tol Uinen, an isle in the bay of Rómenna that she had placed there.

Originally, Uinen was a member of the queens of the Valar, but when Ossë was removed from the Valar, so was Uinen.

She was also included in Melkor’s hatred of the sea. “Slime of Ulmo! I will conquer thee yet, shrivel thee to a stinking ooze. Yea, ere long Ulmo and Ossë shall wither, and Uinen crawl as a mud-worm at my feet!”

In the original story of the Sun and the Moon (Book of Lost Tales), Uinen wove the sails of the Ship of the Moon. She made them of white mists and foam, and some were spread with glittering scales of silver fish while some others were threaded with tiny stars like points of light.

When Ossë raised the Magic / Enchanted Isles during the hiding of Valinor(Book of Lost Tales), Uinen enchanted those who ever managed reached their beaches, weaving them in her hair before Lórien set them into agelong slumber.