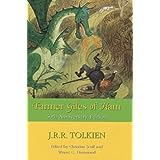 Description: Farmer Giles of Ham is a light-hearted satire for readers of all ages that tells the tale of a reluctant hero who must save his village from a dragon. It is a small gem of a tale that grows more delightful with each rereading

Description: In Morgoth's Ring, the tenth volume of The History of Middle-earth and the first of two companion volumes, Christopher Tolkien describes and documents the legends of the Elder Days, as they were evolved and transformed by his father in the years before he completed The Lord of the Rings. The text of the Annals of Aman, the "Blessed Land" in the far West, is given in full. And in writings never before published, we can see the nature of the problems that J.R.R. Tolkien explored in his later years as new and radical ideas, portending upheaval in the heart of the mythology

Poems from The Hobbit

Description: J.R.R. Tolkien's THE HOBBIT is an epic tale of magical adventure that has captivated children and adults for more than sixty years. Its success comes from its combination of flawless storytelling and enchanting writing, including these twelve delightful poems. This miniature book, illustrated with thirty of Tolkien's own paintings and drawings, contains all the poems, plus Gollum's eight famous riddles, and will be a perfect keepsake for lovers of THE HOBBIT and Tolkien's Middle-earth.

Description: . In The Return of the Shadow (an abandoned title for the first volume) Christopher Tolkien describes, with full citation of the earliest notes, outline plans, and narrative drafts, the intricate evolution of The Fellowship of the Ring and the gradual emergence of the conceptions that transformed what J.R.R. Tolkien for long believed would be a far shorter book, 'a sequel to The Hobbit'.
Amazon UK

Description: In 1925, while on vacation with his family on the Yorkshire coast, four-year-old Michael Tolkien lost his favorite toy, a little lead dog he was reluctant to put down even to dig in the sand. To console and distract him, his father, J. R. R. Tolkien, improvised a story - the story of Rover, a real dog magically transformed into a toy, who, after many fantastic adventures in search of the wizard who wronged him, at last wins back his life

Description: Christopher Tolkien continues to present his father's previously unpublished work. In part one, Sauron Defeated, the account of the writing of The Lord of the Rings is completed and ends with a new Epilogue. Part two contains papers written between 1945-1946 reporting the discussions of a literary club in Oxford from 1986- 1987. The third part is a new version of the Numenorean legend, The Drowning of Anadune.
Amazon UK

Description: Douglas Anderson has also collected here wonderful illustrations from all over the world. The many new annotations in this edition reflect more than a decade?s additional scholarship on the history and evolution of The Hobbit, and the annotations and illustrations are newly integrated with the core text in a handsome reader-friendly format.

Description: The Book of Lost Tales was the first major work of imagination by J.R.R. Tolkien, begun in 1916-1917 when he was twenty-five years old and left incomplete several years later. It stands at the beginning of the entire conception of Middle-earth and Valinor, for the Lost Tales were the first form of the myths and legends that came to be called The Silmarillion.

Description: The Book of Lost Tales was the first major work of imagination by J.R.R. Tolkien, begun in 1916, when he was twenty-five years old, and left incomplete several years later. It stands at the beginning of the entire conception of Middle-earth and Valinor, for the Lost Tales were the first form of the myths and legends that came to be called The Silmarillion.

The Children of Hurin

Description: The first complete book by J.R.R. Tolkien in three decades--since the publication of The Silmarillion in 1977--The Children of Húrin reunites fans of The Hobbit and The Lord of the Rings with Elves and Men, dragons and Dwarves, Eagles and Orcs. Presented for the first time as a complete, standalone story, this stirring narrative will appeal to casual fans and expert readers alike, returning them to the rich landscape and characters unique to Tolkien

The Children of Hurin Deluxe Edition

Description: This Deluxe Edition of the Children of Hurin comes in a slipcase and matches the deluxe editions of LotR and The Hobbit. The book features color illustrations by Alan Lee.

The Fellowship of the Ring (Hardcover)

The History of the Hobbit Vol. 1 Mr. Baggins

Description: Hardcover: 480 pages Publisher: Houghton Mifflin Company (September 2007) This is the first of a two volume set featuring previously unpublished drafts of The Hobbit. Commentary as well as unpulblished maps and illustrations drawn by Tolkien.

The History of the Hobbit Vol. 2 Return to Bag End

Description: Hardcover: 480 pages The second volume of the set will include the second half of the draft texts of The Hobbit as well as commentary.

Description: A new edition of The Hobbit with a short introduction by Christopher Tolkien, a reset text incorporating the most up-to-date corrections, and all of Tolkien's own drawings and color illustrations, including the rare "Mirkwood" piece.

Description: This is the third volume culled from Tolkien's unpublished manuscripts. Two tales from the Silmarillion the tragedy of Turin Turambar and the epic quest of Beren and Luthienappear in early versions. Turin's story is told in alliterative verse, the other in rhymed couplets. The multiple extant versions of each poem have been painstakingly arranged and synthesized by Tolkien's son Christopher, who has also provided elaborate notes on their relation to previously published works. While the power of Tolkien's central characterstragic, cursed Turin; the lovers Beren and Luthienshines through these poems, they are of interest chiefly in showing the development of a writer's ideas.

The Legend of Sigurd and Gudrun (Hardcover)

Description: The Legend of Sigurd and Gudrún is a previously unpublished work by J.R.R. Tolkien, written while Tolkien was Professor of Anglo-Saxon at Oxford during the 1920s and ‘30s, before he wrote The Hobbit and The Lord of the Rings. It makes available for the first time Tolkien’s extensive retelling in English narrative verse of the epic Norse tales of Sigurd the Völsung and The Fall of the Niflungs. It includes an introduction by J.R.R. Tolkien, drawn from one of his own lectures on Norse literature, with commentary and notes on the poems by Christopher Tolkien.