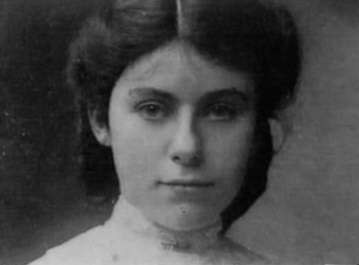 In early 1908, Fr Francis moved the boys to 37, Duchess Road, the home of a Mrs Faulkner, where he hoped they would be happier than with Beatrice Suffield. They shared a room on the second floor, and soon struck up a friendship with another lodger living below them – a girl called Edith Bratt. At that time, Tolkien was 16, and Edith was 19.

Edith and JRRT soon became allies against “The Old Lady” (Mrs Faulkner) and they took to frequenting Birmingham tea-shops. They particularly liked a tea-shop with a balcony overlooking the pavement from which they could throw sugar lumps into the hats of passers-by.

Romance was almost inevitable. Both Edith and Tolkien were orphans in need of affection, and they found that they could provide this for each other. In the summer of 1908, they decided that they were in love – a momentous occasion but one that was decidedly detrimental to Tolkien working towards an Oxford scholarship.

A new attraction at school at this time was the Debating Society. Up until then, Tolkien had avoided speaking there – perhaps because of his still-squeaky voice and his reputation as an indistinct talker. But, spurred on by his new found confidence from Edith, he made his maiden speech on a motion supporting the objects and tactics of the Suffragettes. A later speech he made was for “the House deplores the occurrence of the Norman conquest.”

Tolkien was also successful in rugby. While he was thin, he made up for it by playing with ferocity, and he eventually he got into the school team. He later ascribed his efforts to the impulse of chivalry. 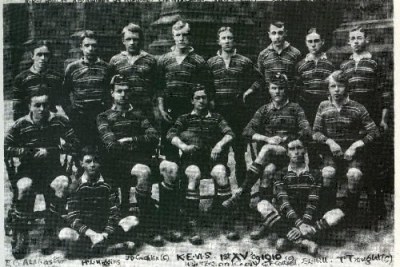 In 1909, towards the end of the autumn term, Tolkien and Edith arranged to go for a secret ride in the countryside. However, Fr Francis found out, and was deeply shaken by the romance. The priest considered himself a father figure to JRRT, and demanded that the love affair should stop for both propriety’s, and Tolkien’s, sake. In the middle of the following storm about Edith, Tolkien sat his scholarship examination in Oxford. Somewhat unsurprisingly, he failed.

His first preserved diary dates from this time, and records the darkness that surrounded him after that failure:

However, Fr Francis did not specifically bid Tolkien not to see Edith, and so, with the ingenuity of youth, they decided that they could continue to meet clandestinely. One day they spent an afternoon together, taking a train out into the countryside. Another day they went to a jewellers where Edith bought Tolkien a pen for his 18th birthday, and he bought her a wrist-watch for her 21st birthday.

After some time of this secrecy, Edith decided she would move away from the situation, and took up lodgings in a house in Cheltenham with an elderly solicitor and his wife. Soon after that, Fr Francis heard word of their previous meetings, and he banned Tolkien from seeing Edith, only allowing him to see her once more to say good-bye. He put a ban on their communication until Tolkien was 21 – three years away. Fr Francis seems to have no idea that his actions were simply fanning the flames of Tolkien and Edith’s love affair.

After Edith left, school became the focus of Tolkien’s life. Relations with Fr Francis were still somewhat strained, and at King Edward’s he found good company and good friendships in the regulated, all-male society. It seems as if he was endeavouring to forget women and to push romance out of his mind at the very age when most boys were discovering the opposite sex.

The next three years were just as important to Tolkien as the years with his mother in Sarehole, as he began to associate male company with much that was good in life.
Tolkien later wrote that he considered that he ended up “as a perfectly respectable and tolerably successful senior.”*

He devoted much time to the Debating Society, where he spoke entirely in Greek for one lecture and broke into Gothic and Anglo-Saxon in others. During the Lent term of 1910, he delivered a lecture to the First Class called “The Modern Languages of Europe – Derivations and Capabilities”. After filling three one-hour lectures, the schoolmaster stopped him, before he had even reached the “Capabilities”.

During 1910, his principal concern was to work hard for a second attempt at the Oxford Scholarship, and on 17th December 1910, he heard that he had been awarded an Open Classical Exhibition to Exeter College. This was not as good as a full scholarship, but still awarded him £60 a year. However, with the help of a school-leaving bursary from King Edward’s, and additional help from Fr Francis, he thought that he would just manage the fees and living expenses.

In 1911, Tolkien became a school librarian along with Christopher Wiseman, Rob Gilson and three or four others. This clique of senior boys formed itself into an unofficial group called the “Tea Club”. Their first meetings were held in the library cubbyhole, though they soon moved to Barrow’s Stores in Corporation Street. There they gathered round a table for six in between two settles, and they called their new special place the “Railway Carriage”. After that move, they called their club the “Barrovian Society”.

Its membership fluctuated slightly, but had a constant nucleus in Tolkien, Christopher Wiseman and Rob Gilson. Tolkien contributed his love to languages and ancient texts to the group’s wide-reaching discussions, reading them parts of Beowulf, The Pearl, Sir Gawain and the Völsungasaga.

Many years later, Tolkien returned to King Edward’s School, and rather to his surprise found that he was mainly remembered for his rugger prowess and his taste in coloured socks!