~Uruk-Hai~
"There were four goblin-soldiers of greater stature, swart, slant-eyed, with thick legs and large hands."

Birmingham is England’s second city, situated in the industrial Midlands. 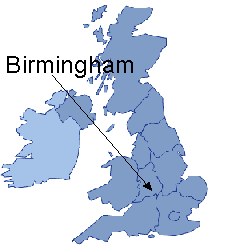 Birmingham has had a long industrial history, from supplying armour and weapons to the Parliamentarians in the English Civil War (1642-46) onwards. By the time of the Industrial Revolution Birmingham had become the industrial and commercial centre of the Midlands. Mills sprang up all around the town. Corn mills were being converted to the production of metal rolling and ironwork.

From 1873 horse drawn trams ran in Birmingham, and after the town gained its first electricity supply in 1882, there were instead first electric trams from 1890.

Kelly’s Directory of Birmingham for 1897 begins:

“Birmingham is a city and a municipal and parliamentary borough, an assize town, the capital of the midlands, and the emporium in England of the mechanical arts.”

By Tolkien’s time, in the final years of the nineteenth century and the start of the twentieth century, the city had grown tremendously. The centre was bustling, new shops and civic buildings constantly being built. But around the centre was an ever-growing region of suburbs and slums, where living conditions varied from good to appallingly bad. Included in these suburbs were Moseley, Hall Green and King’s Heath, three places where Tolkien lived through his childhood. Sarehole, in those times, was still a village outside the city, enclosed by countryside.

For further information on Tolkien in Birmingham, the following links may be of interest: