~Witch King~
"He had a Kingly crown; and yet upon no head visible was it set. The red fires shone between it and the mantled shoulders vast and dark." 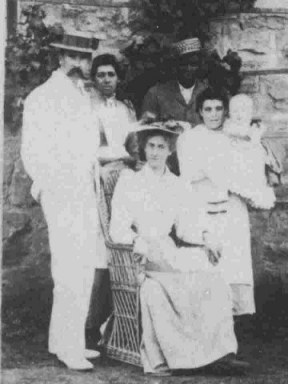 John Ronald Reuel Tolkien was born to Mabel Tolkien, neé Suffield, and Arthur Tolkien, a steadfast man who came from a family of London and Birmingham piano manufacturers.

Arthur had tried to make a career for himself in Birmingham, but when he asked Mabel to marry him, he realised that he needed a better income, and looked towards South Africa for new opportunities. A year after proposing to Mabel, he had found a job with the Bank of Africa and had sailed for Cape Town. During his first year in Africa, he travelled extensively around Cape Town and Johannesburg, but was then made manager of the Bloemfontein branch. This included a house, and with his by-then adequate income, he could afford to marry and he asked Mabel to come out to South Africa.

On the 16th April 1891, Mabel and Arthur were married in Cape Town Cathedral, and just under a year later, Tolkien was born. He had (according to his doting parents) beautiful hands and ears, very long fingers, very light hair, ‘Tolkien’ eyes and a ‘Suffield’ mouth. ‘Ronald’ was Mabel’s preferred name, ‘Reuel’ was a Tolkien family name, and ‘John’ was for his maternal grandfather. He was christened in Bloemfontein Cathedral on the 31st January 1892.

“My father favoured John Benjamin Reuel (which I should now have liked); but my mother was confident that I should be a daughter, and being fond of more ‘romantic’ (& less OT like) names decided on Rosalind. When I turned up, prematurely, and a boy though weak and ailing, Ronald was substituted. It was then a much rarer name in England as a Christian name – I never in fact knew any of my contemporaries at school or Oxford who had the name – though it seems now alas! to be prevalent among the criminal and other degraded classes.”

Tolkien’s early life in Bloemfontein was a gentle one. He was looked after by his mother, as well as a nurse, and sometimes also his aunt May Incledon. He spent the heat of the day indoors, clothed all in white, and was only allowed outside in the early morning and late afternoon. Then, he watched his father gardening, tending to his lawn and his small grove of cypresses, firs and cedars.

Only one major incident marred those times. When Tolkien was beginning to walk, he was bitten by a tarantula, and the poison had to be sucked out of the wound by his nurse. He said that the incident left him with no particular fear of spiders, though when one thinks of Shelob and Ungoliant, one has to wonder.

By the time he was two, Tolkien was sturdy-looking and handsome, with fair hair and blue eyes. He was talking a lot, and visited his father in his office daily where he scribbled out rough drawings. However, he was constantly succumbing to childhood illnesses. His chest was bad all year round, and he had a succession of skin complaints and eye infections. Because of this, he and his younger brother Hilary (born in 1894) were taken to Cape Town – to cooler air. Tolkien later said he had faint memories of the long train journey, the bathing huts on the beach, and the wide, flat, sandy shore. Then, again for the sake of his health, he, Hilary and Mabel went back to England in 1895, leaving Tolkien with only one clear memory of his father: Arthur painting the letters “AR Tolkien” on the lid of a family travelling trunk. He also retained only a few memories from South Africa:

“those deeply implanted impressions, underlying memories that are still pictorially available for inspection, of first childhood are for me those of a hot parched country. My first Christmas memory is of blazing sun, drawn curtains and a drooping eucalyptus.” 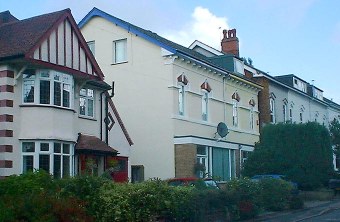 Mabel saw a huge improvement in Tolkien’s health when back in England.

The family lived with Mabel’s parents at 9, Ashfield Road in King’s Heath, Birmingham, and they all slowly adjusted to life in wet, cold England. Tolkien began to forget his father, whom he soon came to regard as belonging to an almost legendary past. He also became closer to his Suffield relatives, developing a strong affection for the family and what they represented, writing

“though a Tolkien by name, I am a Suffield by tastes, talents and upbringing.”

When he discovered that the family’s origins were in Evesham, Worcestershire, he clung on to the concept of Evesham and the West Midlands as his first, and true, home.

In 1896, he, Hilary and Mabel moved to Sarehole, a small village outside Birmingham. The few years Tolkien lived there were some of the most important of his life, nurturing his love for myth, legend, trees and the countryside. 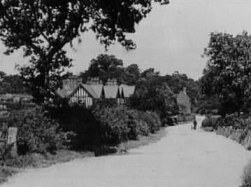 Near their cottage was an old mill, and Tolkien and Hilary undertook numerous expeditions there, and stared through the fence at the water-wheel turning, or ran round to the yard where the sacks were swung down onto the carts. However, the boys’ special place was a silent pool which had swans swimming in it. At the foot of the pool, the dark waters plunged over the sluice to the mill wheel below. Sometimes the boys ventured through the gate and looked into the mill doorway, where the father and son team of millers worked. The son frightened the boys with his white dusty clothes and sharp-eyed face and Tolkien nicknamed him “the White Ogre”. He also created “the Black Ogre” – an old farmer who once chased Tolkien for picking mushrooms. Furthermore, JRRT began to make friends with the local children – his first friends outside his family. He began to even pick up some local words, including “gamgee” for cotton wool.

Mabel started to educate her sons. She was an excellent teacher, and Tolkien could read by the time he was four, and soon after he learnt to write proficiently in a hand that would become as elegant and original as his mother’s. His favourite lessons were languages, and he loved his first taste of Latin. He was as interested in the sounds and shapes of the Latin words as in their meanings, and he realised that he didn’t enjoy his French lessons as much because the sounds didn’t please him so much. He enjoyed botany, but again he was more interested in the shape and feel of a plant than in its botanical details. He was also good at drawing, especially trees or landscapes. As much as he liked drawing trees, he liked being with them more – climbing them, leaning against them, or talking to them. It saddened him that not everyone shared his feelings:

“there was a willow hanging over the mill-pool and I learned to climb it … One day they cut it down. They didn’t do anything with it: the log just lay there. I never forgot that.” 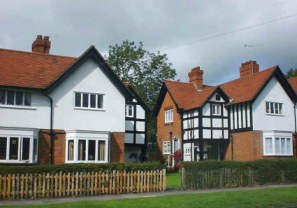 Mabel also gave Tolkien plenty of books to read outside of the school-room. He was amused by ‘Alice in Wonderland’, but did not like ‘Treasure Island’, Hans Christian Andersen or the Pied Piper. He liked Red Indian stories, and longed to shoot with a bow and arrow. He was even more pleased with Arthurian legends and George Macdonald’s ‘Curdie’ books where misshapen and malevolent goblins lurked beneath mountains in a remote kingdom. But best of all were the Fairy Books of Andrew Lang, especially the Red Fairy Book that contained the story of Sigurd and Fafnir:

“I desired dragons with a profound desire … of course, I in my timid body did not wish to have them in the neighbourhood. But the world that contained even the imagination of Fafnir was richer and more beautiful, at whatever cost of peril”.

At the age of seven, Tolkien began to compose his own story about a dragon. When he showed it to his mother, her biggest criticism was that he shouldn’t say ‘green great dragon’, but had instead to say ‘great green dragon’. Tolkien himself said that this possibly was a significant event for him, as he didn’t write another story for many years, instead concentrating on studying language. Another event that was later to become significant in his writings was the start of a recurring dream sequence where a great wave towered up and advanced over the trees and fields. The wave was poised to engulf Tolkien, and all that around him. He called it his ‘Atlantis complex’.