~Arien~
"She was as a naked flame, terrible in the fullness of her splendour."

CS Lewis and the Inklings

On the 11th May 1926, Tolkien attended a meeting of the English Faculty at Merton College. Also attending was Clive Staples Lewis, a recently elected Fellow and tutor in English Language and Literature at Magdalen. 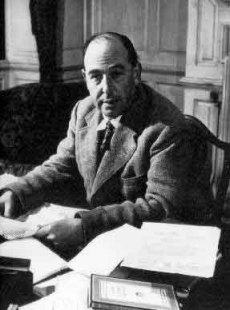 CS Lewis was to provide Tolkien with the kind of emotional and intellectual friendship that he had missed since the breaking up of the TCBS many years before. While Tolkien continued to see Christopher Wiseman on occasion, his former close friend was now heavily involved with his duties of running a Methodist public school (Queen’s College in Taunton) and the two found that they now had little in common.

In May 1927, CS Lewis was enrolled into the Coalbiters, and a long and complex friendship began. It seemed to start through their shared love of Norse mythology, by which CS Lewis had been captivated by since childhood. They began to meet regularly in Lewis’s rooms in Magdalen, sitting long into the night talking about the Gods and Giants of Asgard, or even the internal politics of the English School. They also commented on each other’s poetry, Tolkien even lending Lewis the typescript of “the Gest of Beren and Lúthien”.

Lewis was 28 at that point, heavily built, with a predilection for wearing baggy clothes. He had a quick mind and a generous spirit. He was a mediaevalist, though he was based firmly in the “literature” side of the School.

One of the underlying tenets of their friendship, though later it proved one of their reasons for their disillusionment with each other, was Lewis’s conversion to Christianity. He wrote, in “Surprised by Joy” that his friendship with Tolkien:

Lewis had been brought up as an Ulster Protestant, but professed agnosticism during his teenage years. During the 1920s, however, he had arrived at what he called his “New look” – the belief that the Christian ‘myth’ conveyed as much truth as most men can comprehend. And in 1926, he came to realise that what he termed his search for ‘joy’ was, in reality, a search for God. It soon came to him that now he must decide to either accept or reject God.

At that point in his thinking, he met Tolkien. In Tolkien, he found a person of wit and intellectual capacity who was also a devout Christian. They argued long about theology, but Lewis eventually came to admit that he believed Tolkien to be correct. In the summer of 1929, he started to profess theism, and in 1931, he finally admitted to believing in Christianity.

However, this was not a one way street, with Lewis simply absorbing the knowledge that Tolkien put his way, as Tolkien composed a long poem called “Mythopoeia” about his conversations with Lewis. The Irishman came to fill a gap in Tolkien’s life:

“Friendship with Lewis compensates for much, and besides giving constant pleasure and comfort has done me much good from the contact with a man at once honest, brave, intellectual – a scholar, a poet, and a philosopher – and a lover, at least after a long pilgrimage, of Our Lord.”

But maybe Lewis’s biggest effect on Tolkien was one of encouragement, urging Tolkien to press on with the now retitled “Silmarillion”. Tolkien later said that it was from Lewis alone that he got the impression that his works could be more than a private hobby:

“The unpayable debt that I owe to him was not ‘influence’ as it is ordinarily understood, but sheer encouragement. He was for long my only audience. Only from him did I ever get the idea that my ‘stuff’ could be more than a private hobby. But for his interest and unceasing eagerness for more I should never have brought The L. of the R. to a conclusion …..”

After Lewis’s conversion to Christianity, the two men began to rely less on each other’s exclusive company, instead becoming the nucleus of a group of friends, who would come to gain worldwide reknown as The Inklings. This was the ultimate expression of Tolkien’s “clubbable” urge which originated with the TCBS. The Inklings began to coalesce at the same time that the Coalbiters began to disband, in the early 1930s.

The Inklings was originally a name given to a literary society founded in about 1931 by a University College undergraduate called Tangye Lean. Both Lewis and Tolkien attended its meetings, at which unpublished compositions were read and criticised. After Lean left Oxford, the name was half-jokingly transferred to the circle of friends that found themselves orbiting Lewis. 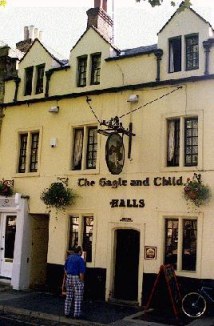 They was simply a group of male, Christian friends, most of whom were interested in literature. Some attended all meetings, some attended sporadically, but certainly the lynch pin of the group was Lewis, without whom a meeting would be unimaginable. Members included Major Warren Lewis (Lewis’s brother), RE Havard (Tolkien and Lewis’ doctor), Owen Barfield (Lewis’s longtime friend) and Hugo Dyson. In later years, both John and Christopher Tolkien also attended on occasion. They met on a weekday morning in the Eagle and Child pub, generally on Tuesdays. They also sometimes met on Thursday nights in Lewis’s sitting room, congregating sometime after 9pm. Someone would produce a work in progress and read it out loud, and the others would provide criticism. However, soon the proceedings would spill over into talk of all kinds and the gathering would end only at a late hour.

By the late 1930s, The Inklings were an important part of Tolkien’s life, and among his own contributions to the group were readings from the unpublished manuscripts of “The Hobbit”.

When war broke out, in 1939, another man was recruited into the group – Charles Williams. He worked for the Oxford University Press in their London offices, the staff of which were transferred to Oxford during the hostilities. And it was Williams who helped start the cooling off in friendship between Tolkien and Lewis. Tolkien was unsure about Williams, even though the London man praised “The Lord of the Rings” when some chapters were read to the group.

“We liked one another and enjoyed talking … We had nothing to say to one another at deeper (or higher) levels.”

There was possibly even some jealousy on Tolkien’s part, as the best part of Lewis’s attention had shifted slightly from Tolkien to Williams.

A new phase of friendship between Tolkien and Lewis began when Lewis became known as a Christian apologist. Tolkien always regretted that Lewis’s conversion did not lead him to Catholicism, as he continued to have a great resentment of the Church of England. By the mid 1940s, Lewis was receiving a good deal of publicity in connection with his Christian writings, and at the same time, there was a slight cooling on Tolkien’s part towards their friendship. Perhaps he was upset that the pupil was outstripping the master, or perhaps he felt that one’s views on religion were too private and holy a thing to make money from.

However, they were still great friends well into the 1940s, with Tolkien having an almost unbounded affection for Lewis. The Inklings also continued to provide him with great joy and encouragement, and wrote a parody of the opening lines of Beowulf about their bond:

“Lo! We have heard in old days of the wisdom of the cunning-minded Inklings; how those wise ones sat together in their deliberations, skilfully reciting learning and song-craft, earnestly meditating. That was true joy!”