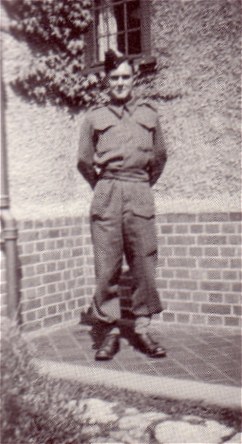 Michael was born in October 1920, in Oxford.

When Michael was 4, he lost his toy dog on the beach while on holiday at Filey. To cheer the young boy up, Tolkien turned the incident a story called “Roverandom” – the story of a dog turned into a toy after biting a wizard.

As a child, he (and also Christopher) had a passion for railways, and Tolkien converted a whole upstairs room into a track layout for the boys. They used to go to watch engines, and he soon learnt to draw excellent pictures of the GWR locomotives. Tolkien occasionally even took them to see the ‘Cheltenham Flyer’ pass through the stations.

From his father, he “inherited an almost obsessive love of trees: as a small boy I witnessed mass tree-felling for the convenience of the internal combustion engine. I regarded this as the wanton murder of living beings for very shoddy ends. My father listened seriously to my angry comments and when I asked him to make up a tale in which the trees took a terrible revenge on the machine-lovers, he said, ‘I will write you one.'” (Grotta)

He went to the Dragon School, in Oxford, then the Oratory School in Berkshire, and then spent a year at Trinity College, before becoming an anti-aircraft gunner in the Army as WW2 started. Michael saw active service defending aerodromes in the Battle of Britain, and later in France and over Germany. He was then seriously injured in an accident with an army vehicle during training and hospitalised in Worcester. He was invalided out of the army, and returned to Oxford in 1944 to finish his degree. After the war, he was given the George Medal for his actions in defending aerodromes during the Battle of Britain.

By 1947, he had married Joan Griffiths, and had an infant son, also called Michael. He had taken up teaching as a career. In 1959, he was teaching in the Midlands, and his family had increased by two daughters – Joan and Judith. One of Joan’s sons was Royd, the only Tolkien to act in the Peter Jackson films.

In the 1960s and 1970s, he taught Classics at Stoneyhurst College, and later in his life he moved to Waddington.

He also published a few booklets of poetry – “Learning Not to Touch”, Turn of the Tide”, “Reaching for a Stranger”, “Exposures” and “Outstripping Gravity”.