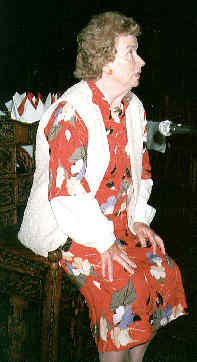 Priscilla (Prisca to her father) was born in 1929 in Oxford, and provided Edith and Tolkien with a greatly longed-for daughter.

She studied for her degree in Lady Margaret Hall, and then after that, in 1955, she accompanied Tolkien on a tour around Italy, visiting Venice and Assisi. After that, she started living on the other side of the city from her parents, but still saw them frequently. She worked both as a probation officer and a social worker in Oxford.

She took a particular interest in her father’s art, writing an article entitled “My Father the Artist” for ‘Amon Hen’, the bulletin of The Tolkien Society, and contributing an article in a similar vein to a yet unpublished volume of reminiscences about Tolkien.

Priscilla, in an understated way, has come to represent Tolkien to many fans, especially in the UK. She attends the Tolkien Society’s Oxonmoots each year, is their Honorary Vice-President, and hosts a reception for the fans. This year, she launched the Royal Mail’s Tolkien stamp edition. And, together with her brother John, she created the Tolkien Family Album – a book full of photographs and reminiscences about the family. In 1992, she travelled to Bloemfontein where she unveiled a plaque commemorating the 100th anniversary of Tolkien’s birth at the Anglican Cathedral, and she since visited South Africa two more times.

She is a patron of the Find Your Feet charity, and lives in Oxford.