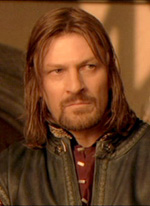 Character:
Sean Bean plays Boromir, son of the Steward of Gondor.
Comments About Character:
He was a complicated and complex man. I found that really interesting to get to grips with. He's very mixed up, trying to do what's best for his people - a gentleman really, but he's in an environment where he's been on the forefront of war so he's had to be strong. But within there is a gentleman of very good quality. --Nando Times (12/11/01) He's constantly fighting this battle, to keep down this desire to own the ring...He goes through quite extreme emotions during the course of the film. And that's what I was trying to get across, this kind of inner struggle. --Independent (12/2/01)
Biographical Info:

Shaun Mark Bean was born on the 17th of April in 1959 in Sheffield, Yorkshire, England. His father was a welder in a family welding business and originally Bean followed him into the business. That was until he was accepted into the Royal Academy of Dramatic Arts. While there he won a Silver Medal for his graduation performance in Waiting for Godot as well as two awards for fencing. His professional debut was at the Glasgow Citizens Theatre as Tybalt in Romeo and Juliet. Just a short while later he played Romeo in the same play with the Royal Shakespeare Company. Also with the Royal Shakespeare Company he played in Fair Maid of the West, A Midsummer’s Night Dream, and Last Days of Mankind. Some of his other stage performances included Deathwatch at the Young Vic and Killing the Cat at the Theatre Upstairs.

His television career was kicked off in 1984 with a guest appearance in The Bill as Horace Clark. The next year he played the Scarred Man in Exploits at West Poley. In 1987 he joined John Hurt, Jane Horrocks, Gemma Jones, Jonathan Pryce, Joely Richardson, and Mirand Richardson in Jim Henson’s The Story Teller. Next he played Dominic O’Brien in the 1989 adaptation of Catherine Cookson’s The Fifteen Streets. A year later he was cast in the role of Carver Doone in the famous Lorne Doone. 1991 was full of roles for Bean including Steve in the series My Kingdom for a Horse, Lovelace in Clarissa, and Gabriel Lewis in Tell Me That You Love Me. A great amount of attention was brought to Sean when he played gamekeeper Mellors in Ken Russell’s 1992 controversial four part adaptation of D.H. Lawrence’s Lady Chatterly’s Lover. In the same year he played Sean Miller in the documentary The Secret World of Spying with Patrick Bergin and Harrison Ford. Sean’s big career break was when he took the role of Richard Sharpe for the 1993 TV adaptation of Bernard Cornwall’s novels. Bean gained the role after Paul McGann was involved in an accident and was no longer able to play the role. He made 4 more mini-series in the Sharpe character, one every year until 1997. In between filming for the Sharpe miniseries Bean also made several other TV appearances. Two years later in November Bean appeared again on British TV screens as Neil Byrne in the new Drama series Extremely Dangerous.

His film career began in 1984 when he played in Winter Flight as Hooker. He played several other small roles including Patriot Games in 1992 with Harrison Ford and Patrick Bergin. His international notoriety came about in 1995 when he co-starred with Peirce Brosnan in the James Bond Movie Golden Eye as Agent 006 Alec Trevelyan. In 1998 he played Toombs in Airborne with Steve Guttenburg. Two years later he played Jason Locke in Essex Boys. In 2001 he played Boromir in Peter Jackson’s Lord of the Rings: Fellowship of the Ring as well as Patrick Koster in Don’t Say A Word with Michael Douglas.

Sean has appeared in American commercials for Accuview contact lenses. He is well known for his voiceovers on British TV Ads including The Imperial Cancer Research Fund, The National Blood Service, Beechams FluPlus, and Mark & Spencer Christmas 2002 Campaign. After thirteen years off the stage Bean returned to the stage in the title role in Macbeth. Bean has always desired to play Macbeth and views the role as the biggest career challenge he as ever had. Since Macbeth ended in March of 2003 he has returned to the film. He is currently filming Troy playing Odysseus along side of Brad Pitt, Orlando Bloom, Peter O’Toole, and Julie Christie.

Sean has been married and divorced three times. His first marriage was to Debra James in 1981. In 1991 he married actress Melanie Hill and they had two daughters, Lorna and Molly. They were divorced in 1997 when he married Actress Abigail Cruttenden. Their daughter, Evie Natasha, was born on the 6th of November 1998. Two years after their daughter’s birth they were divorced. Sean is an avid fan of the Sheffield United Football Club.