~Smeagol~
"Look. Look! See what Sméagol finds. They are young. They are tender. They are nice, yes they are. Eat them, eat them!" 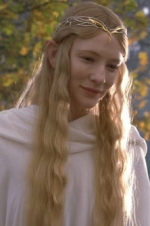 Character:
Cate Blanchett plays Galadriel, Elf queen of Lothlorien.
Comments About Character:
I loved playing Galadriel because she is so iconic. She is the one in The Fellowship of The Ring who truly tests Frodo. I also think she has a profound message to give about taking responsibility for ourselves and our actions. And, yes...I have to admit I have always wanted to have pointy ears. --Tribute (12/01)
Biographical Info:

Catherine Elise Blanchett was born May 14, 1969 in Melbourne, Victoria, Australia. She is the middle of 3 children, having an older brother, Bob, who works in the computer field and a younger sister, Genevieve, who is a theater designer. Her father passed away when she was of the age of 10. At the age of 18, she was spotted and asked to be an extra in a film. The next day, she left the film totally petrified of the whole experience.

Even after this experience, she pursued the theater, attending various schools that specialized in that subject. She attended the Methodist Ladies College in Melbourne, where she had the pleasure to be named the School Drama Captain. She also graduated in 1993 from Australia’s National Institute of Dramatic Art. She spent the most of her career after that in theater where she won international acclaim, both critical and popular, in a little over a year after her graduation from the National Institute. She won awards for her performances as Felice Bauer, the bride, in Timothy Daly’s Kafka Dances and Carol in David Mamet’s Oleanna. In 1995, she was nominated for Best Female Performance for her role as Ophelia in the production of Hamlet. Other theater credits include Helen in Sweet Phoebe, Miranda in The Tempest, and Rose in The Blind Giant is Dancing.

She also worked in television, co-starring in ABC’s (Australian Broadcasting Corporation) Heartland, Bianca in Bordertown , as Janie Morris in G.P., and in the Police Rescue.

Her debut in feature films didn’t come until 1997 in Paradise Road, where she was a member of a strong female cast led by Glenn Close. Perhaps one of her most famous roles came a year later in 1998 in her portrayal of Queen Elizabeth I in Elizabeth, earning her a Golden Globe for Best Actress and an Academy Award nomination for Best Actress. Other film credits include a film version of Oscar Wilde’s An Ideal Husband, The Talented Mr. Ripley and Pushing Tin.