~Fingolfin~
"Fingolfin unfurled his blue and silver banners, and blew his horns, and flowers sprang beneath his marching feet." 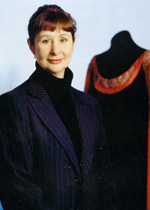 Ngila Dickson was born in Dunedin, New Zealand in 1956 and now lives in Auckland with her partner Hamish Keith, an art critic. Though relatively unknown outside of New Zealand until her work on Lord of the Rings catapulted her into the spotlight, she had in fact been working steadily as a costume designer throughout the 1990s. Her CV includes the films ‘Peach’, ‘Jack Be Nimble’ and ‘Heavenly Creatures’. The latter was directed by Peter Jackson, a collaboration which was repeated so successfully for the LOTR trilogy. She also worked on those other mainstays of New Zealand entertainment, the Xena and Hercules series.

With the release of the LOTR trilogy, her career has gone meteoric. After completing work on Lord of the Rings, she moved on to design for the Tom Cruise blockbuster ‘The Last Samurai’. Her latest design contribution is for the film ‘Without A Paddle’, currently post-production.

In both 1997 and 1998, she won the Best Contribution to Design award at the New Zealand Television Awards. More recently, she has won a BAFTA and a Saturn Award for her dazzling contribution to ‘The Two Towers’. She was Oscar nominated for her work on ‘The Fellowship of the Ring and won an Oscar for ‘The Return of the King’. Perhaps a measure of her great talent is that she was actually competing against herself in her Oscar category – both for ‘The Return of the King’ and ‘The Last Samurai’.

While costuming LOTR, she had 40 tailors working for her. They produced between 30 and 40 costumes for each main cast member, not to mention countless costumes for extras – in total, an estimated 18,000 costumes. And her work on The Last Samurai involved the creation of over 2,000 different costumes. Many have to be produced quickly if shooting schedules change, meaning that a costume designer must be flexible, tireless, and above all, have a sense of humour. Ngila possesses all of these things in abundance.