~Nazgul~
"Give up the halfling, she-elf!" 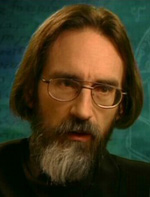 Character:
Illustrator and Conceptual Designer
Comments About Character:
On Illustrating Tolkien: â€œPutting to paper thoughts about Tolkien's universe is a risky undertaking, I have rarely seen fiction - and above all fantasy - which arouses such passions. Visualisation is even more perilous.â€
Biographical Info:

John Howe was born on August 21, 1957 in Vancouver, Canada. He was a lead concept artist and illustrator, working in collaboration with Alan Lee, for the three movies that made up “The Lord of the Rings”. He has also illustrated many pieces of Middle Earth material, including The Hobbit, The Silmarillion, and The Lord of the Rings itself. In addition to this, he also illustrated the board game that was released shortly after the movies.
His work is, however, not limited to Lord of the Rings alone. He has illustrated many myths, such as Beowulf, and worked on other films, such as the Lion, the Witch, and the Wardrobe, released in 2005, and has illustrated the Enchanted World series, and many other children’s books.
Interestingly, his works seem to be so popular that they were stolen from an exhibition in France. They are most likely still in France. In his own words, John Howe says:
“The main picture lost is the ‘Gandalf‘, destroyed is the square picture of Minas Tirith from the 1991 calendar, missing still are two more, ‘The Uruk-hai‘ and ‘Eowyn & the Nazgûl‘. They were stolen during the night of March 18 -19, 1997, from the Mediatheque of Sedan, in Northern France. Eight of the eleven stolen pictures were returned anonymously by a gentleman who said (over the phone, anonymously) he was the father of the young man who stole them. The police weren’t able to find out more than that. That’s the story.”
The ‘Gandalf‘ painting must be the most well known painting among Tolkien readers – having graced the one-volume paperback cover of “The Lord of The Rings“.
John Howe currently lives in Neuchatel, Switzerland.