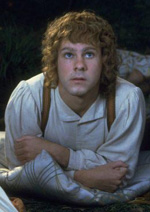 Character:Dominic Monaghan plays Merry (Meriadoc) Brandybuck, a friend of Frodo Baggins.
Comments About Character:
He is very sharp-witted and he is very funny and clever. With Pippin being his partner in crime Merry tends to be the person who suggests things and gets Pippin into trouble then has to pull him out at the last minute. These are the things that he takes with him and also as he goes through these incredible situations of war and tragedy he grows as a person and becomes more responsible and gets older. I think what I tried as hard as I could to do was give him a real sense of being a Hobbit which is different than a human. Hobbits show their emotions very easily. --Tribute (Dec 2001)
Biographical Info:

Dominic Bernard Patrick Luke Monaghan was born on the 8th of December 1976 in Berlin, Germany to Austin and Aureen Monaghan. At the age of 12 his parents moved Dom and his older brother to the UK. His passion for films began at the age of 6 after watching Star Wars. His love for Tolkien’s work ran in the family, his household was filled with middle-earth artifacts including a statue of Gandalf. From 12-17 Dom studied karate as well as being an avid reader of comic books including Spider-Man and the Hulk.

In 1994 he played Jason Conroy on BBC Radio4’s show “Stockport…So good they named it once.” His next project was in 1997 when he played in “Hostile Waters” as Sasha. After 6th form college he acted in several youth theatres, and his big break in 1996 came when he earned the part of Geoffrey Shawcross in the BBC1 TV series Hetty Wainthropp Investigates. In 1999 he played Etienne Rollinger on the TV show “Monsignor Renard,” and a year later played in the TV mini series “This Is Personal: The Hunt for the Yorkshire Ripper as Jimmy Furey.

The next year he auditioned for the role of Merry in Peter Jackson’s “Lord of the Rings” Trilogy. Three months later he was told that he had indeed won the role. This news left him torn as he had been living with his girlfriend in Normandy. To him there was no other choice but to leave and go to New Zealand for the filming, so he broke up with his girlfriend. Since the filming he has now set up residence in the US and has purchased a small forest in Bangalore, India. His reason for the purchase of the forest is to offset the amount of carbon dioxide that he puts into the world. Dom in fluent in the German language and his current interests include surfing, writing, music, and the Manchester Untied FC. Currently he is collaborating on a script with his “Lord of the Rings” co-star Billy Boyd.