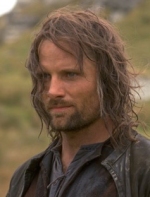 Character:
Viggo Mortensen plays Aragorn, a Ranger who joins the Fellowship of the Ring.
Comments About Character:
I did also like the character and the characterâ€™s journey. I was doing everything I could to be faithful to what Tolkien had written and thereâ€™s so much to explore. --Newsweek (12/6/01)
Biographical Info:

Viggo Peter Mortensen Jr. was born on the 20th of October 1958 in Manhattan, New York, USA.