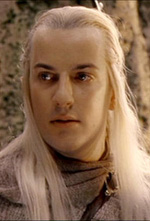 Character:
Craig Parker plays Haldir, one of the Elves of Lothlorien.
Comments About Character:
Biographical Info:

Craig Parker was born in Suva on the island of Fiji, moving to Glenfield, New Zealand with his parents as a child.

A home-loving person at heart, Craig was around 17 when he became involved in Theatresports, giving an excellent outlet for his talent at improvisation and stand-up comedy. This engagement lasted for 10 years. At the age of 19, Craig appeared in a TV show called Hot Shots, then went on to gain further experience by working on other TV and Theatre productions.

The big breakthrough came for Craig in 1992, when he landed a role as ‘Guy Warner’, which lasted 4 years, in New Zealand’s popular soap opera Shortland Street. He continued his TV success and appeared in several episodes of Xena – Warrior Princess and Young Hercules.

It was during work on radio plays that Craig came in touch with Peter Jackson, who he had worked with recording his voice for the character of Frodo in the adaptation of Lord of The Rings.

When the screen adaption of Lord of The Rings was being cast, Craig, despite his dark hair and complexion, was picked to play Haldir, and it was his appearance in the first two parts of the films that finally brought him to international attention. Rumour has it that Craig would have lived happily ever after, had not he pushed in front of Mr Jackson in the lunch queue. Strangely, later that day, the script changed. Now Haldir would lead a troupe of Elves into Helms Deep only to suffer an Uruk-hai’s axe in the back and a slow, lingering death in the arms of Aragorn.

Craig is a very private person and has been quoted as saying that he has a ‘healthy distrust’ of the media, and that ‘It really pays to keep your private self for the people you like and love. It does me no favours at all to reveal my personal life to people who read magazines.’

Through all his various endeavours, Craig always remained a comedian, showing his skills as an entertainer in Shows like Scared Scriptless (1999) as well as various comedy debates. He has been the MC at the biggest and smallest of events and continues to be in great demand for his overall ability to make any audience feel at home.

Those people lucky enough to have seen Craig at Conventions will already know of his double act with Mark Ferguson (Gil-Galad).

Craig hobbies are swimming, sailing, eating and playing, he loves to listen to David Bowie, Lori Anderson and REM. He lists as his favourite actors, John Hurt and Vanessa Redgraves. He speaks French and has a love for clothes, shoes, Chardonnay and Indian cuisine. He currently lives in London.