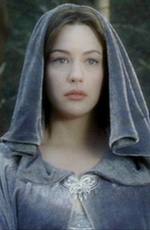 Character:
Liv Tyler plays Arwen UndÃ³miel, the daughter of Elrond, and the love of Aragorn.
Comments About Character:
Elves were the first creatures placed in Middle-earth, so they are very powerful and knowledgeable. They're also immortal. Arwen has been living for 3,000 years, an incredible amount of time. When we meet her, she's in love with Aragorn, who is a human. And she gives it up to be with him. That's something I really responded to, that idea. It's something our society lacks today. --MSN Interview
Biographical Info:

Liv Tyler was born on July 1st of 1977 in New York to Bebe Buell and Todd Rundgren as Liv Rundgren. Bebe, a famous model and rock and roll groupie, and her life-partner Todd Rundgren raised her. Shortly after her birth, though, her mother broke up with Todd and moved herself and Liv to Portland, Maine. At the age of 9 Liv began to suspect that Steven Tyler might be her biological father when she attended an Aerosmith concert. Her half-sister Mia, a plus size model, looked remarkably similar to Liv and that was what convinced Liv that she was indeed Steven Tyler’s daughter. When she approached her mother about this she admitted it and they discussed it. Three years later Liv changed her last name to Tyler. Liv was convinced to start modeling at 14 by family friend Paulina Porizkova, who was also a famous model. Modeling ran in the family, not only was her mother a famous model, but her Grandmother Dorothea Johnson was also a model. At 15 she took up smoking, but quit 10 years later. At 16 she appeared in Aerosmith’s clip Crazy and was later embarrassed by her sexy appearance.

In that same year she began filming her first two movies: “Silent Fall” as Sylvie Warden and “Heavy” as Callie. A year later she filmed her next movie “Empire Records.” Her real breakthrough as a Movie Star came when she took the role of Lucy Harmon in the 1996 movie “Stealing Beauty” with Tom Hanks and Bruce Willis. Liv decided early on to mainly choose films that were smaller and had more of a quality feel to them. In 1997 she was offered the role as Grace Stumper in “Armageddon” and turned down the role twice before finally giving in. In the same year she appeared in “Inventing the Abbots” as Pamela Abbott. Having never taken acting lessons, her natural talent was evident her many films. Her dedication to her career was shown when she cut her hair short for 1998’s “Cookie’s Fortune” and when she died her hair red for “One Night at McCool’s” in 1999. She has also appeared in several commercials including ads for Bongo Jeans, Pantene Shampoo, and Lux Shampoo.

In 2001, she won the coveted role of Arwen in Peter Jackson’s “Lord of the Rings” Trilogy as well as playing Jewel in “One night at McCool’s.” In February of 2001 Royston Langdon, a musician and lead singer of Spacehog, proposed to Liv. Two years later on March 25th they were married in a private ceremony at a villa in the Caribbean. She is currently working on Kevin Smith’s “Jersey Girl” with Jennifer Lopez and Ben Affleck.