Have a story to tell? Share it in the Fanfiction section.

Incorporating a Small Pond into a Grey Water Diversion!

I modified one of my grey water diversions the other day (the bath water) as the old one was no longer effective due to tree roots blocking the agri-pipe. This time I decided I wanted to make a feature of it, as well as avoiding more tree root blockages. So I decided I would incorporate a small pond into the system.

the old system involved redirecting the bath water via buried pipes into a loop of agri-pipe (90mm diameter black polypipe with drainage perforations) at the top of a gently sloping garden bed. When the bath is drained, the water flows underground through the regular pipes into the agri-pipe where it seeps into the soil, thus watering the plants. Even if the water is still hot, the passage through he pipes acts as a cooling system, further enhanced as it seeps through into the soil. This method has worked well for nearly 10 years until about six months ago when I noticed the bath taking much longer to drain. As the garden bed it waters contains most of my fruit trees, and it has been exceptionally dry the last few years I theorised that the tree roots had entered the perforated agri-pipe and mostly blocked the flow of water. So the last few months the water has just flowed across the path and onto the garden. Very messy.

So, what to do to avoid tree roots blocking the pipes again? I decided to again run the drain pipe underground, to the garden bed, but this time, instead of having it pass into buried agri-pipe, I have had it rise above ground, and flow into a small fibreglass pond, the sort you get with the cascading triple pond kits. The pond is only 35 cm x 45 cm x 20 cm deep, and where the water would normally over flow from, I have run the outlet of the pipe into. The exposed drain pipe (65 mm PVC drain pipe) is disguised using an assortment of small rocks I have dug up around the yard. The pond is positioned so that the water overflows evenly around most of its rim, from where it flows into a shallow depression across the garden bed. From here it is able to seep through most of the bed. And as the bath is drained several times a day, there is no risk of the pond becoming stagnant or smelly (self cleaning, what a bonus) nor is there any risk of it becoming a breeding ground for mosquitos, as every morning, my sons hot bath is drained to allow my daughter to have one. The water will still be a bit warm for the mozzies larvae to survive in by the time

it reaches the pond. So it is a win – win situation. An effective waste water irrigation system for my fruit trees, which is also a water feature. I knew that old pond would eventually come in handy. 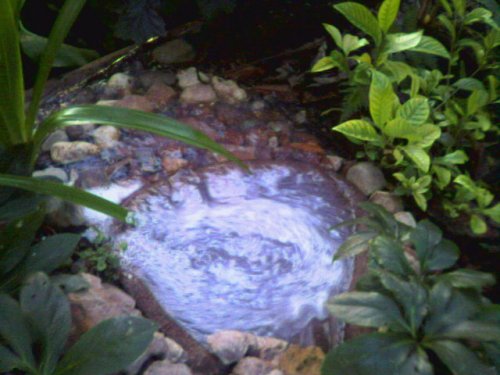