By Michael L. Martinez Xenite.Org: Worlds of Imagination on the Web 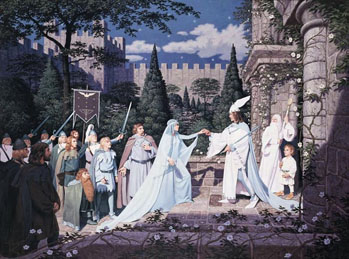 Occasionally people inquire in the Tolkien news groups about wedding traditions in Middle-earth so they can add some enchantment to their own wedding plans by emulating the “traditions” in their favorite fictional world. That’s a rather nice idea, but it’s difficult to find many details in Tolkien about weddings.

He mentions weddings. Aragorn married Arwen in Gondor. That was a royal wedding which must have seemed very much like Prince Charles’ wedding to Lady Diana Spencer. The wedding of Beren and Luthien was also probably quite a sensation, but Tolkien writes virtually nothing about it.

In one early version of the story of Tuor and Idril they are married by Turgon in Gar Ainion, the Place of the Gods, and the entire city celebrates. But Tolkien abandoned the idea that the Valar were in any way “gods”, and probably Gar Ainion ceased to be a part of Gondolin. In THE SILMARILLION the wedding of Tuor and Idril is still celebrated by a feast, but no other detail is mentioned.

A feast was also used to celebrate the joint wedding of the children of Hador and Halmir. So feasts seem to be a consistent part of the wedding tradition in Middle-earth, whereas we normally have a Rehearsal Dinner one or two days before the wedding and then just a Reception after the ceremony (see below).

The wedding of Aldarion and Erendis was held in western Numenor, and the Eldar came and gave them many gifts at the feast. Thus, it seems that (among the Dunedain at least) the feast and giving of gifts was like the Rehearsal and Reception combined. It was also customary for the father of the bride to lay her hand in the groom’s hand. Thingol does this for Luthien and Beren and Elrond does this for Arwen and Aragorn, but this custom does not seem to be part of the ceremony itself. Rather, it’s a public declaration of the father’s consent to the union, a symbolic way of saying, “I give my daughter to this man.” It was something equivalent to the publishing of banns, or to the wedding invitations which are sent out today. Anyone who saw the laying of the hand appears to have been invited to the ceremony (but this is only an inference).

Singing and dancing were important to the peoples of Middle-earth. It may be that songs or poems were recited at the weddings, at least of the princely houses, and that part of the feasting included dancing (much as dancing may be part of the Reception today). It thus seems that Tolkien envisioned Middle-earth weddings to be very much like they are handled in western culture today. The only special gesture seems to be the father’s laying of the daughter’s hand in the groom’s hand PRIOR to the ceremony, and there was apparently no rehearsal dinner or quaint reception, but simply a feast after the ceremony where the couple sat at the table and received presents and guests.

Probably, styling a wedding after Middle-earth’s weddings would raise a few eyebrows and invite unwarranted commentary from the more outspoken relatives of both families. But if two people want to be wed as if they were in Middle-earth, it might be possible to come up with a reasonable compromise between today’s traditions and Tolkien’s.

Well, since I wrote the above, I’ve reread MORGOTH’S RING and have found a treasure trove of information on Eldarin marriage customs there. What follows here are citations from the essay “Of the Laws and Customs among The Eldar pertaining to marriage and other matters related thereto: Together with the statute of Finwë and Miriel and the debate of the Valar at its making”. The details on marriages are only a small part of the essay.

The Eldar wedded for the most part in their youth and soon after their fiftieth year. They had few children, but these were very dear to them. Their families, or houses, were held together by love and a deep feeling for kinship in mind and body; and the children needed little governing or teaching. There were seldom more than four children in any house, and the number grew less as ages passed; but even in days of old, while the Eldar were still few and eager to increase their kind, Fëanor was renowned as the father of seven sons, and the histories record none that surpassed him.

The Eldar wedded once only in life, and for love or at the least by free will upon either part. Even when in after days, as the histories reveal, many of the Eldar in Middle-earth became corrupted, and their hearts darkened by the shadow that lies upon Arda, seldom is any tale told of deeds of lust among them.

Marriage, save for rare ill chances or strange fates, was the natural course of life for all the Eldar. It took place in this way. Those who would afterwards become wedded might choose one another early in youth, even as children (and indeed this happened often in days of peace); but unless they desired soon to be married and were of fitting age, the betrothal awaited the judgment of the parents of either party.

In due time the betrothal was announced at a meeting of the two houses concerned, and the betrothed gave silver rings one to another. According to the laws of the Eldar this betrothal was bound then to stand for one year at least, and it often stood for longer. During this time it could be revoked by a public return of the rings, the rings then being molten and not again used for a betrothal. Such was the law; but the right of revoking was seldom used, for the Eldar do not err lightly in such choice. They are not easily deceived by their own kind; and their spirits being masters of their bodies, they are seldom swayed by the desires of the body only, but are by nature
continent and steadfast.

After the betrothal it was the part of the betrothed to appoint the time of their wedding, when at least one year had passed. Then at a feast, again shared by the two houses, the marriage was celebrated. At the end of the feast the betrothed stood forth, and the mother of the bride and the father of the bridegroom joined the hands of the pair and blessed them. For this blessing there was a solemn form, but no mortal has heard it; though the Eldar say that Varda was named in witness by the mother and Manwë by the father; and moreover that the name of Eru was spoken (as was seldom done at any other time). The betrothed then received back one from the other their silver rings (and treasured them); but they gave in exchange slender rings of gold, which were worn upon the index of the right hand.

(Thus the gift of Galadriel to Aragorn, since she was in place of Arwen’s mother, was in part a bridal gift and earnest of the wedding that was later accomplished.)

But these ceremonies were not rites necessary to marriage; they were only a gracious mode by which the love of the parents was manifested, and the union was recognized which would join not only the betrothed but their two houses together. It was the act of bodily union that achieved marriage, and after which the indissoluble bond was complete. In happy days and times of peace it was held ungracious and contemptuous of kin to forego the ceremonies, but it was at all times lawful for any of the Eldar, both being unwed, to marry thus free of consent one to another without ceremony or witness (save blessings exchanged and the naming of the Name); and the union so joined was alike indissoluble. In days of old, in times of trouble, in flight and exile and wandering, such marriages were often made.

It would seem there was therefore no such thing as pre-marital sex among Tolkien’s elves. Once they joined their bodies, they were married.

I was recently asked by someone (who is not native to America or to the English language) what I meant by “rehearsals and receptions”. The reply I gave was:

That is an American custom, but I don’t know how widespread it is.

A Rehearsal is where the bride and groom with select family members, bridesmaids, groom’s men, et. al. show up at the church or chapel 1-4 days prior to the wedding ceremony. The minister (or whomever officiates) takes them through a practice wedding (although they probably don’t recite all the prayers and stuff — we didn’t at my rehearsal).

Sometimes there is a “Rehearsal Dinner”, usually paid for the by groom’s family, immediately after the rehearsal.

The Reception is held after the wedding ceremony, sometimes in the same location, sometimes elsewhere. Usually, the bride and groom are having their pictures taken as the wedding guests join the reception. You might get a lot of food or just cake. Champagne is commonly served. Once the bride and groom show up, they speak to the guests (privately, if possible), and go through some “traditions”: the groom takes a garter from the bride’s leg and throws it to the unmarried men in the crowd; the bride throws her bouquet to the unmarried women; they cut the wedding cake and give each other a piece. More extravagant receptions include dinner and dancing.

Image: The Wedding of the King by Greg and Tim Hildebrandt