~Goldberry~
"Her gown was green, green as young reeds, shot with silver like beads of dew; and her belt was of gold, shaped like a chain of flag-lilies set with the pale blue eyes of forget-me-nots." 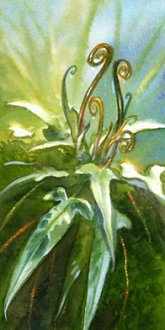 Athelas was a plant whose leaves could be used to help heal wounds and cure sickness. When bruised, the leaves had a fresh, wholesome smell. The usual preparation of athelas for healing use was to steep broken or bruised leaves in boiling water. The wound was then bathed with the water. The scent also refreshed all those standing near.

A description of athelas is given in the "Unfinished Tales" (pg 319):

“Then Huan came and bore a leaf,
of all the herbs of healing chief,
that evergreen in woodland glade
there grew with broad and hoary blade.”

In Middle-earth, athelas was only found near the Númenorean / Dúnedain encampments and dwellings of old.

The Akallabêth spoke of the Eldar bringing gifts, including herbs of 'great virtue', from Aman to the new kingdom of Númenor. It is likely that athelas was among these gifts, and it may have came from the gardens of Lórien, where those who dwelt in the Blessed Realm went for rest.

Huan brought a leaf of athelas to Lúthien to heal a wound given to Beren by Celegorm and Curufin.

Aragorn used the plant several times to heal wounds during the War of the Ring. The first time was to treat the Morgul-wound Frodo had received at Weathertop. The next time was on Samwise’s and Frodo’s wounds after they left Moria. He then used it to cure Faramir, Éowyn, and Merry of the Black Breath in the Houses of Healing in Minas Tirith. In the "War of the Ring" (HoME), it is said that Aragorn used athelas to tend Snowmane's wounded shoulder.

At the time of the War of the Ring, it had fallen out of use, and was only remembered by the Rangers and in such old women's rhymes as this one:

When the black breath blows
and death's shadow grows
and all lights pass,
come athelas! come athelas!
Life to the dying
In the king's hand lying.