~Sam~
"'A nice pickle we have landed ourselves in, Mr. Frodo!' he said, shaking his head." 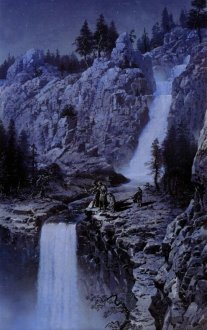 Related Terms: Ithilien, TÃºrin of Gondor, Faramir, Minas Tirith, Gondor
Meaning "Sunset window" or "West window" in Sindarin, this was the hidden refuge of the rangers of Ithilien, built behind a waterfall by Túrin of Gondor in 2901 of the Third Age.

Looking out from the refuge, there was a thin veil of water from the falls. When the setting sun shone through it, the red light was broken into many flickering beams of ever-changing colour.

The refuge itself was framed by a low arch, from which one passed to a wide rock-chamber, with an uneven sloping roof. There was a dark narrow door to one side. The cave was filled with a great store of arms and food.

At one time, water had flowed down through the cave and out through the arch, but workmen of old changed the water's course, and the stream was rerouted to the rocks far above the cave. All ways into the cave were sealed except one, and the pool below was full of knives of stone.

The refuge was manned continuously until Faramir's retreat to Minas Tirith before the siege of Gondor.
Encyclopedia entry originally written by Ereinion