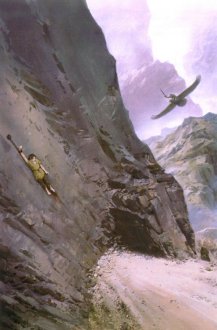 Pronunciation: my-thros ('th' as in 'these clothes')
Related Terms: Union of Maedhros, Sons of FÃ«anor
The closest and most accurate meaning of the name of the oldest of the seven Sons of Fëanor is 'Glitter of metal'.

After Fëanor's death, Maedhros was considered to be their leader of the sons. He was one of those who swore the Oath of Fëanor, following their father back to Middle-earth to make war upon anyone who held the Silmarils away from the Noldor.

Maedhros was captured by Morgoth and hung by one wrist from Thangorodrim. Fingon, remembering their old friendship, went alone to find and rescue him. Seeing the device Morgoth used to imprison Maedhros, and hearing him beg for death, Fingon prayed to Manwë for mercy. Carried by Thorondor, the King of all Eagles, Fingon tried to rescue Maedhros. Being unable to get his hand free, Fingon cut it off above the wrist and the Eagle carried them back to Mithrim.

Having lost his right hand in the rescue, Maedhros healed in time and learned to wield his sword with left hand, becoming even more deadly that he had been ever before. Together with his brothers he held the eastern passes into Beleriand.

Maedhros tried to reunite the Houses of the Noldor, yet his attempts failed in the disaster of Nirnaeth Arnoediad. After Morgoth was defeated, Maedhros and his younger brother Maglor recovered the two remaining Silmarils. Yet because of their evil deeds, they could no longer hold the Jewels for they burnt their flesh, causing unbearable pain. In torment and anguish, Maedhros cast himself into a fissure in the earth, and the Silmaril was lost with him.

In the notes for a planned “excursus” on the names of the Sons of Fëanor (c.1968) Tolkien gave his Quenya name as Nelyafinwë 'Finwë third'. In these same notes his mother-name is given as Maitimo , 'well-shaped one'. In addition he had the epessë of Russandol 'copper-top' because of his red hair. (Source: HoME Vol.XII, The Shibboleth of Fëanor)
Encyclopedia entry originally written by Saurid