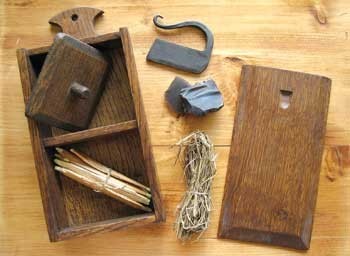 Related Terms: The Hobbit
The most common portable means of making fire prior to the invention and general use of matches. A small box contaning flint and a steel and pieces of dry matter, usually scorched cloth but sometimes dried fungus.

In The Hobbit the dwarves used tinder-boxes. It is probable that the tinder-box was the general method of making fire in Middle-Earth. The steel and flint were struck together until the sparks ignited the tinder, which was blown gently until a flame appeared.

Editor’s note: Matches were invented in 1827 and safety matches in 1855