~Ulmo~
"For all seas, lakes, rivers, fountains and springs are in his government; so that the Elves say that the spirit of Ulmo runs in all the veins of the world."

I have a tendency to read too much into things. It’s not a natural inclination but an acquired skill, and now it seems like I can never stick to the printed letter: I need to interpret. A philosopher’s curse, it seems.

Searching the boundaries of a text, I often find that behind some words there is too much meaning: there are too many ways in which a certain line can be seen, too many paths to take when travelling to the heart of a sentence. But sometimes, after thinking too much, I have the feeling that I struck gold.

When I started to interpret this hymn, one of the most beautiful pieces of poetry in all of Tolkien’s work, I had no idea what I would find. I had two days left to find something for a presentation I had to do (which was part of my training as a teacher); and I was sort of panicking. It was supposed to be a philosophic presentation, but since I had spent too much time reading The Two Towers I was really in the wrong mindset for Nietzsche or Kant. So I chose this poem, and the night before I had to bring it in front of the class I sat down to write my presentation.

At first, I thought that maybe it told something about Eorl the Young. And I wanted to see if ‘my class’ could tell me something about this character by simply reading the poem. But while I started to list questions that could prompt them to give the correct answers, I found that this hymn is so much more than a shallow ode to a far-off but much respected ancestor.

This poem, I believe, holds the key to the culture of the Rohirrim. 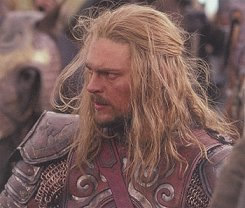 The first two lines can easily be seen as a mere description of Eorl the Young, who indeed was a blonde warrior who possessed a talking horse (always found that bit slightly unrealistic). But the order in which the different attributes of Eorl are sorted tells us something about what is important in this culture:

— The horse comes before the Man. Where now the horse and the rider? The horse comes first, and this is spot on when you think about the Rohirrim: their most important possession are their horses. Economically, they live off breeding them; but horses also serve them well in the defence of their country and they speak of them and treat them with the utmost respect.
— The horn, the helm and the hauberk all represent the warrior or soldier. The Rohirrim are described as mostly farmers (breeding horses and all), but one major trait of this people is their eagerness for battle: the prospect of battle seems to inspire them more than frighten; and above all they seek honour and glory.
— The bright hair flowing points us in the direction of their pride and heritage again: amidst dark-haired people their fair hair is what divides the Rohirrim from their fellow men. As a people, they take pride in the fact that they are not servants of Gondor, that they are an independent land which does fairly well on their own. Their physical appearance is a token of this difference and autonomy.

If we continue to read the hymn this way, then we also learn how their culture is built. What they value the highest, is also what is in fact the least important: their horses (their greatest heritage) and the art of warfare. The ideal of the warrior sits at the heart of the Rohirric culture. Art and entertainment are only secondary to it, and even less important is agriculture; although this is clearly a necessity for any community to come to grandeur or culture – in times of famine a civilisation often stutters and even falls to pieces. 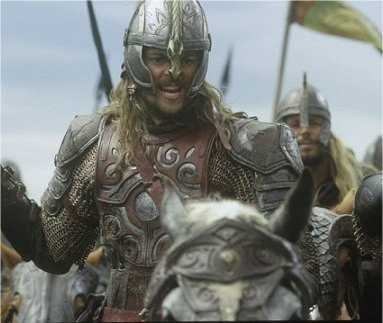 This all points to a man-centred or anthropocentric society: Man and his makings and deeds stand at the epicentre of a vast cultural domain. This in fact is confirmed by the last two lines, which speak of nature as pointless and empty when Man is no longer around to observe it.

You can see this view expressed accurately in the two ways in which ‘fire’ is described: when still within the boundaries of man-made culture, it is referred to as the red fire glowing. However, when it is wild and uncivilised nature, it becomes smoke of dead wood burning: all of a sudden fire is a destructive force.

One could derive many conclusions from this reading: if it is correct than you could also assume that it is not the (natural) afterlife that provides a good Man of Rohan with immortality, but instead man-made songs and tales. And indeed, we find that when the Rohirrim speak about a possible death (Théoden at Helm’s Deep for instance), they do this in terms of ‘worthy of songs’. The best example of this idea is the Lady Éowyn: she seeks death in battle not to embrace her doom and to find the peace of heart she can’t find in life; but to have at least some glory there, on the battlefield.

The worth of a Man is not decided by a deity in this culture, but by his (or in this case her) peers.

The only thing that does not fit this interpretation is the idea of ‘time’ that is used in this poem: ‘They have passed like rain on the mountain, like a wind in the meadow; the days have gone down in the West behind the hills into shadow.’. This seems to suggest a more naturalistic concept of time – time being inherent to nature and not placed there by mankind. On the other hand, it could also be a mere analogy: rain and wind are passing by, but necessary and leave a lasting mark on the land for those who understand nature’s way. So perhaps it says something about the Rohirric idea of history more than time: history being inevitable and lasting, of the utmost important to the future. That could lead us to conclude that this is a culture deeply rooted in tradition.

Finally, we can also see that this is a poem about the glory of a faraway past, long gone – remembered by a people that now stand on the brink of destruction, which is best made clear by that breathtakingly beautiful last line: ‘Who shall (…) behold the flowing years from the Sea returning?’

{For those of you who think this is all a little far-fetched: of course it is, didn’t I warn you?}