Boromir of Gondor – a personal view

A Full Circle: Boromir of Gondor and the Meaning of Life

Some people read a book like others watch a movie: with a bucket of popcorn in one hand and an empty head, looking for escapism, a thrill, a chill, and something to get them to fall asleep easier at night.

Others will treat books like they’re food: devouring them, going from one book to another, endlessly searching for more knowledge, more entertainment, more depth, more letters… I was one of those.

Until, one fine day, I met Boromir of Gondor.

Now, Boromir is a peculiar man. He’s not easygoing; in fact, it takes a while to get to know him. As I first saw him, sitting there under the tree, black-feathered arrows piercing his chest and life flooding from his body; he didn’t say much to me either.

I don’t think he noticed me, really. But I certainly noticed him. 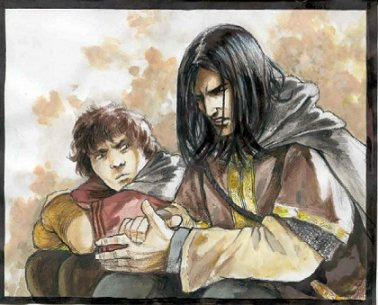 You know how it goes: you’re thirteen, your life is a mess and every little problem gets blown out of proportion, especially your own. And you come at a point where you start to ask the wrong questions, the philosopher’s questions: why am I here? Who am I? Is there a God? What does freedom really mean? What does it mean to be a good person? If you can’t change, does that mean you’re lazy or plain bad? Who cares?
The kind of questions that cannot be answered, not even after studying philosophy for four years, because there is no answer except the one that teaches you how to survive.
You go from book to book, from teacher to teacher, expecting to find it but ending up restless, agitated, losing the hope of ever finding some kind of peace of mind.

Enter a tall dark-haired soldier from Gondor, Captain of the Guard, and all-round loser. A man with no future and a past he’d rather forget, a family of which one third is dead, one third has gone mad and one third loves him but looks down on him nonetheless. A man caught in a hopeless fight against an unseen immortal enemy, locked in a body that betrays him by becoming old and weak and reluctant to fight.

The doom of man ever on the horizon, blinding him, driving him into the arms of theft and greed.

Of all the characters in the book, all the heroes and heroines, all the good and funny and loveable creatures – I fell in love with the one member of the Fellowship that fails.

From the Cradle to the Crypt: To Be or Not to Be?

Boromir travelled to Rivendell to win the counsel of Lord Elrond Peredhil in a matter that troubled him and his brother greatly: a dream. A disturbing dream, mind you, disturbing enough to leave the battlements behind and travel a full hundred and eleven days, half of it on foot.
He never intended to become a member of the Fellowship, not at all: he wanted to return to his city, tell his father that the One Ring, Isildur’s Bane, had been found, and that a Chieftain of the Dúnedain was readying himself to reclaim his throne as king of Arnor – and perhaps even Gondor.
He even invited Aragorn along – well, it’s more fun than travelling alone for sure.

But in stead of a homecoming party with some chocolate cake and some ale, he got shot and died.

Such is life, really: we are born into something we weren’t really planning for. A family that doesn’t necessarily like us, a country which isn’t always where we’d like to be, a life that is more of a struggle than a joyride. All we really want is to go home, to a place where we can be at peace, if only a little.
Instead, life is a constant fight: we are fighting our friends and enemies, the odds that are against us, our bodies which limit us, the moral codes in which we are born, the social and economical background of the country we live in. Ourselves.

Is there a meaning to all this, a purpose? For Boromir, there is: he is the heir of Denethor II. He has to sit on the Steward’s throne one day and make sure that Gondor is safe. He was born to do this, he was raised to do this, and he will die doing this. His life resolves around this one goal.
It’s not a selfish one: he is not seeking glory, seeking honour. Unlike Éowyn or Théoden for instance, who seek glory in battle, a valiant death that will render them immortality through tales and song.

Some readers have confused Boromir’s desperate attempts to keep Gondor’s honour high with arrogance and narcissism. But if he were truly arrogant, would he have listened to the group when they wanted to travel through Moria and Lórien? And if he were really so self-centred, would he have asked Aragorn to come to Minas Tirith with him?

The people of Gondor, as we learn from Faramir and from the events in Return Of the King, are a proud people. They take pride not in their great past, but in their own acts of defiance; because it is the only form of strength they have left. As infinitely unimportant mortals, a colony of ants on the brink of destruction, they find courage in their own actions rather than in some distant past where men with nobler blood did greater deeds.

If Boromir boasts and blows his horn to no end, it’s not because he’s a show-off, but because he derives strength from this: the knowledge that despite his own limitations, he is not completely useless.

And so Boromir comes to a point where he has immortality within his grasp: a weapon that can make him rise beyond his shortcomings, his weaknesses, and his failing body. A chance to free Gondor forever, to reach his goal. A chance to please his father, perhaps… who knows what he is thinking when he asks Frodo to lend him the Ring.

And note: he asks, first. He tries to explain, give reasons for what he is about to do. But Frodo makes it clear that he won’t get his hands on the Ring – and before he knows it, he is ready to kill the Hobbit.

Don’t we all do this at times: kill the Hobbit? Do something wrong for all the right reasons? Justify it to ourselves, try to wrap it up in sugar and motivations?

But it always blows up in our faces, and what do we do then? Too often, we run away. Like Éowyn runs into the arms of death on the battlefield, trying to escape a life she doesn’t want to lead. Or like Gríma, who stays with Saruman because asking for forgiveness would be admitting to being guilty. Or even like Gollum, who runs from one personality to another, constantly chased by desire and the knowledge that this desire has led him to do terrible things.

Boromir doesn’t run away. He returns to the camp with the message that Frodo left, and in his dying moment tells Aragorn just what has caused this, what he has done. Knowing full well the extent of his deed, the evil caused by it, he doesn’t wallow in guilt or hide in lies and self-deceit. His honour doesn’t lie in upholding a myth, but in being truthful.

And so I looked him in the eye, my Man of Gondor, and understood what exactly it was that he was trying to tell me: you need not exceed yourself. True honour, true strength doesn’t lie in perfection; but in understanding who you really are, admitting your flaws and learning to live with them.

Life is not about avoiding failure, it’s about being able to go on afterwards. It’s about choosing the road your heart tells you to follow, and face the consequences. Not to build lie upon lie, and wear a mask of righteousness, but to be. Simply be.

There’s no happiness to be found where perfect men will tread, only the shade of greater minds and greater hearts. Boromir never attempted to be Aragorn, and never tricked himself into believing he could. He gambled and he lost, and he admitted defeat.

To me, in all of Lord Of the Rings and perhaps even in all of Tolkien’s works, there’s no greater man to be found than this one, who taught me all I needed to know to survive and find some happiness of my own: I need not exceed myself.