~Curufin~
Curufin was called "the crafty" and it was said that he "inherited most his father's skill of hand".

A half-elf, daughter of Nimloth (an elf-maiden) and Dior Eluchíl, (son of Beren and Lúthien) sister of Eluréd and Elurín, mother of Elrond and Elros, wife of Eärendil the Mariner. Born in the First Age, around the year 500 in Ossiriand. Her name means “star-spray” because of the starlight glinting on the waterfall Lanthir Lamath at her father’s home the night she was born. She wedded Eärendil, (a half-elf) at the Mouths of Sirion.

Elwing had a Silmaril because it was passed down to her father Dior, from his parents Beren and Luthien. Fëanor’s sons attacked Doriath (where Dior lived) to regain the Silmaril. Many were killed, including Dior and Nimloth, but Elwing escaped into the woods, with the Silmaril. 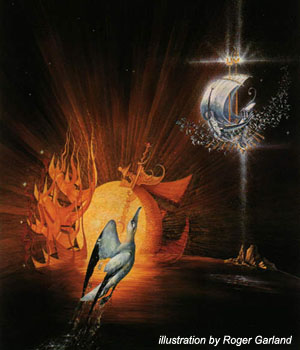 When tidings came that Elwing lived, the sons of Fëanor went to the Havens of Sirion to reclaim it. Many were killed, and Elwing cast herself into the sea with the Silmaril. All was not lost though, because Ulmo gave her the shape of a white bird, and with the Silmaril on her breast she flew to find her husband on his ship. After finding him, they went together to Valinor, and there were given the choice of which race to belong to. Elwing chose to be counted among the elves, as did her husband.

A white tower was built for her on the borders of the Sundering Seas, and there she learned much from the sea birds. She learnt the tongue of the birds, and they taught her how to fly. When her husband came close after long voyages, she would fly on white and silver wings to meet him. As far as we know, she is still in the tower, or flying on her silver wings.