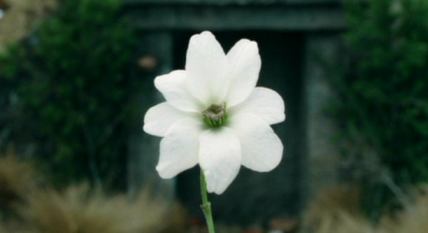 Also called Alfirin and Uilos (the elvish names) and Evermind.

Simbelmynë was mostly known as a white flower but it could appear in many light colours. The flower had a bell-like shape, ands could be seen throughout the whole year. Tolkien compared Simbelmynë to the anemone, a small white flower among the grass.

Alfirin means immortal. This name was given to the flower because it grew thickly on the tombs and graves of men – including on the barrows of the kings of Rohan and on the grave of Elendil.

The name Uilos (“Everwhite”) was used for the flowers Tuor found growing around the Gate of Silver on the journey into Gondolin. After the First Age elves used the name Alfirin instead of Uilos.

The name Evermind, or ‘everlasting memory’ comes from the literal translation of the word Simbelmynë.

“How fair are the bright eyes in the grass! Evermind they are called, simbelmynë in this land of Men, for they blossom in all the seasons of the year, and grow where dead men rest.”
(LotR, TTT, The King of the Golden Hall. Said by Gandalf.) 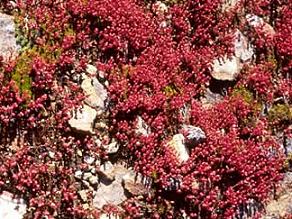 Aeglos was a tall plant with thorns, and its flowers are sweet-smelling and white. It was a larger relative of modern gorse. It was found on the slopes of Amon Rûdh in West Beleriand.

The flowers of Seregon were a deep, blood-red colour. Seregon was the only plant that grew on the rocky head of Amon Rûdh. When it was in flower it seemed that the rock was bathed in blood. This plant was related to the modern mountain-dwelling stonecrop.

Seregon means ‘blood of stone’ – blood because of the colour of the flowers; stone as it grew on rock and stone.

(note: picture is of modern stonecrop) 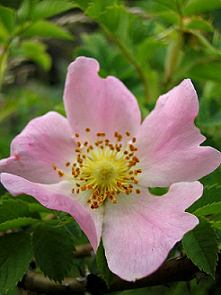 The anemone was (and is) a small flower of many pale colours. Frodo and Sam found white and blue anemones in the lands of Ithilien. They are related to Simbelmynë.

Asphodel had yellow and white flowers, and grew in Ithilien.

Eglantine was (and is) a wild rose. It was also known as sweet-briar and had sweet-smelling flowers and leaves. It grew in Ithilien.

One of the hobbits, Eglantine Banks, was named after this flower.

The iris was (and is) a very colourful flower which had thin pointed leaves. It was found in Ithilien.

The Gladden River and the Gladden Fields took their name from a variety of the flower.

In “The Lord of the Rings” the term ‘‘iris-swords’ is mentioned. This is a reference to the thin, pointed leaves.

Lilies were (and are) very large white flowers that grew on slender stalks. They were found at least in Lebennin and Ithilien.

In the modern world lilies appear in many colours but in Middle-earth they were always white.

A bell-shaped flower that had a golden colour. It was found in the vales of Lebennin. 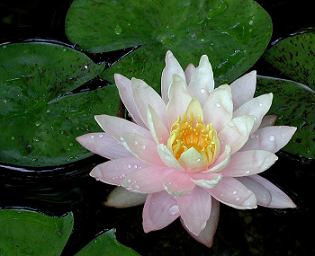 Samwise Gamgee named his first daughter, Elanor Gardner, after it.

A pale flower that grew among the golden trees of Lórien.

These were water flowers with round, flat leaves and flowers of many colours They floated on the surface of ponds and quiet rivers, especially the Withywindle and the Anduin.