~Elrond~
"Strangers from distant lands, friends of old. You have been summoned here to answer the threat of Mordor."

Lothlórien was the ever-young realm of Galadriel, a land of beauty where time seemed to stand still and where no evil could enter. It was a haven and a place of rest for those who trusted in the good and bounty of the Lord and Lady of the Golden Wood. A land of continual spring though dark winter may pass beyond its limits.

The air in the land was crystal clear and clean, as if the fabric of the land was somehow more intense than the world around it:

“It seemed to him that he had stepped through a high window that looked on a vanished world. A light was upon it for which his language had no name. All that he saw was shapely, but the shapes seemed at once clear cut, as if they had been first conceived and drawn at the uncovering of his eyes, and ancient as if they had endured for ever. He saw no colour but those he knew, gold and white and blue and green, but they were fresh and poignant, as if he had at that moment first perceived them and made for them names new and wonderful. In winter here no heart could mourn for summer or for spring. No blemish or sickness or deformity could be seen in anything that grew upon the earth. On the land of Lórien there was no stain.” (Lothlórien) 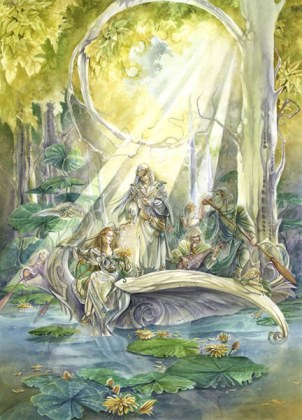 So what was in this magic land?

Trees. Big trees. Lots of big trees. A glade surrounded by trees. And a city – in some trees.

The mallorns and their flets

The trees involved were mallorns, enormous trees that grew only in Lothlórien. Their leaves did not fall in the autumn, just turned to a golden-yellow. Only when spring came and the new green leaves opened did they fall.

“And then the boughs are laden with yellow flowers; and the floor of the wood is golden, and golden is the roof, and its pillars are of silver, for the bark of the trees is smooth and grey.” (Lothlórien)

Of all the trees in Middle-earth, the mallorns are best described, for example, from the following quotes:

“The branches of the mallorn-tree grew out nearly straight from the trunk, and then swept upward; but near the top the main stem divided into a crown of many boughs, and among these they found that there had been built a wooden platform, or flet as such things were called in those days: the Elves called it a talan. It was reached by a round hole in the centre through which the ladder passed.” (Lothlórien)

“its great smooth bole gleamed like grey silk, and up it towered, until its first branches, far above, opened their huge limbs under shadowy clouds of leaves.” (The Mirror of Galadriel)

“Frodo passed many flets: some on some side, some on another, and some set about the bole of the tree, so that the ladder passed through them.” (The Mirror of Galadriel) 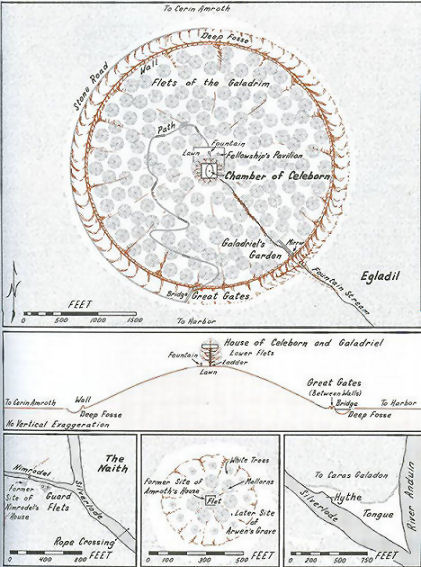 “There was a wide treeless space before them, running in a great circle and bending away on either hand. Beyond it was a deep fosse lost in soft shadow, but the grass upon its brink was green, as if it glowed still in memory of the sun that had gone. Upon the furthest side there rose to a great height a green wall encircling a green hill thronged with mallorn-trees taller than any they had yet seen in all the land. … In their many-tiered branches and amid their ever-moving leaves countless lights were gleaming, green and gold and silver.” (The Mirror of Galadriel)

There are many details of Caras Galadhon scattered through the Mirror of Galadriel chapter. On the outer edge of the fosse was a road paved with white stone. The great gates of the city faced south-west, and were tall, strong, and hung with many lamps. They were set within a wall that encircled the city, and opened soundlessly with no sign of guards.

Near the top of the hill was a wide lawn with a fountain shimmering in it. The fountain was lit by silver lamps that swung from the trees, and the water spilled into a basin of silver, from which a white stream came forth. On the south side of the lawn was the mightiest of the mallorn trees, upon which was a broad white ladder. At night, a pavilion with soft couches was set up on the lawn for the Fellowship.

In that largest mallorn was Celeborn’s chamber, placed on a wide talan, like the deck of a great ship. On the talan was an oval-shaped chamber, so large that almost it would have served for a hall of Men upon the earth. In the middle of the chamber was the trunk of the great mallorn, tapering towards its crown but still forming a pillar of wide girth.

The gold-roofed chamber was filled with a soft light, and two chairs were situated beneath the bole of the tree and canopied by a living bough. These were Celeborn and Galadriel’s seats.

On the southern slopes of the hill of Caras Galadhon, past a high green hedge, was an enclosed garden. No trees grew there, and it lay open to the sky.

Within this was a long flight of steps, leading into a deep green hollow, through which ran murmuring a silver stream that issued from the fountain on the hill. At the bottom, upon a low pedestal carved like a branching tree, stood Galadriel’s Mirror – a basin of silver, wide and shallow, and beside it stood a silver ewer, used to fill the basin from the stream.

To the north-west of Caras Galadhon was a great grass-covered mound, called Cerin Amroth, where flowers – niphredil and elanor – bloom all year round.

“Upon it, as a double crown, grew two circles of trees: the outer had bark of snowy-white, and were leafless but beautiful in their shapely nakedness; the inner were mallorn-trees of great height, still arrayed in pale gold. High amid the branches of a towering tree that stood in the centre of all there gleamed a white flet. At the feet of the trees, and all about the green hillsides the grass was studded with small golden flowers were other flowers, white and palest green: they glimmered as a mist amid the rich hue of the grass. Over all the sky was blue, and the sun of afternoon glowed upon the hill and cast long green shadows beneath the trees.”

Cerin Amroth was the heart of the ancient realm of Lórien, and the mound of Amroth, where once his house was built.

The rivers and streams of Lothlórien

Both the River Silverlode (otherwise known as the Celebrant) and the Nimrodel stream ran through the woods of Lothlórien. The Great River, the Anduin, flowed past its eastern boundaries, and the Silverlode emptied in to it at the Tongue.

The river ran about ten miles south and east from Caras Galadhon, and the path between the two ran through thick thickets of mallorn trees and rolling woodlands of silver shadow. The river edges were long lawns of grass studded with elanor.

On the bank of the Silverlode, at some distance up from the meeting of the rivers, was a hythe made of white stones and white wood. By it were moored many boats and barges, some brightly painted and shining with silver, gold and green, but most were plainer, either white or grey.

One boat in particular stood out, Galadriel and Celeborn’s swan boat.

“Its beak shone like burnished gold, and its eyes glinted like jet set in yellow stones; its huge white wings were half lifted. … Two elves clad in white steered it with black paddles.” (Farewell to Lorien)

The Nimrodel was different to the Silverlode, and beloved of the Galadhrim:

“Of this stream the Silvan Elves made many songs long ago, and still we sing them in the North, remembering the rainbow on its falls, and the golden flowers that floated in its foam. All is dark now and the Bridge of Nimrodel is broken down. I will bathe my feet, for it is said that the water is healing to the weary.” (Lothlórien)

“”Farewell, sweet Nimrodel!” cried Legolas. Frodo looked back and caught a gleam of white foam among the grey tree-stems. “Farewell,” he said. It seemed to him that he would never hear again a running water so beautiful, for ever blending its innumerable notes in an endless changeful music.” (Lothlórien)