~Goldberry~
"Her gown was green, green as young reeds, shot with silver like beads of dew; and her belt was of gold, shaped like a chain of flag-lilies set with the pale blue eyes of forget-me-nots."

”Manwe has no thought for his own honour, and is not jealous of his power, but rules all to peace” – The Silmarillion 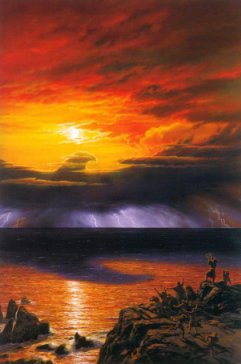 Name: Manwë Súlimo (Súlimo is translated to mean: “Lord of the Breath of Arda” literally means: “the breather”

Titles: the Elder King, the Ruler of Arda, King of Arda, Lord of the West.

Appearance: Clothed in blue, blue eyes, and sapphire sceptre (the Noldor wrought it for him).

Attributes: Wind, clouds, air, and birds (especially the eagles). The birds bring news of Middle-earth to his house upon Taniquetil.

Maia: It is not clear, but maybe Olórin.

Home: Mansion called Ilmarin on the summit of Taniquetil in the mountains of Valinor.

-Pardoned Melkor, (Manwë is free from evil, and cannot comprehend it).
-Helped Fingon to rescue Maedhros by sending Thorondor, King of the Eagles to retrieve them from Angbad.
-The eagles upon Meneltarma, the Holy Mountain, were called the “Witnesses of Manwë” and were sent to keep watch on the mountain and all the land.
-Gave Lúthien and Beren their second chance at mortal life.
-Summoned the council where it was decided to send emissaries (the Istari) to Middle-earth. He specifically said he wished Olórin (Gandalf) to go.