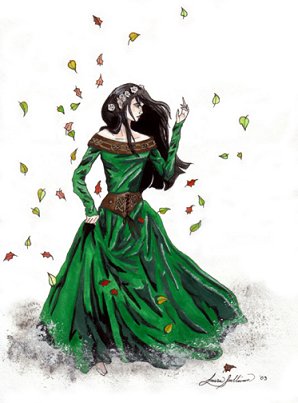 Melian was a Maia who served both Vána and Estë. She dwelt long in Lórien, tending the trees that flowered in the gardens of Irmo, and nightingales sung about her wherever she went. She was the most beautiful, most wise, and most learned in songs of enchantment of all Lórien’s people. When Melian sang at the mingling of the lights of the Trees, the Valar would leave their works, the bells of Valmar would fall silent and the fountains cease to flow, and the birds would hush their chattering.

She was akin to Yavanna before the world was formed, and she loved the deep shadows of the woods. She taught the nightingales how to sing, and from then on, they flocked to her wherever she roamed.

Around the time that the elves awoke at Cuivíenen, Melian left Valinor and came to Middle-earth, where she filled the silence before dawn with her song and the songs of her birds.

While on a journey to seek Finwë, Elwë came across the sound of nightingales one starlit night in Nan Elmoth, and enchantment fell upon him. He heard the voice of Melian beyond the nightingales, and it filled his heart with desire and longing. He passed deep into Nan Elmoth until he came across Melian, the unclouded light of Aman in her face, and a starlit mist around her. She took his hand, and while they stood there together many years passed in Middle-earth.

When they came out of the trance, Melian took upon herself the form of the Eldar, and after her marriage, she became physically bound to Middle-earth.

Melian and Thingol became King and Queen of the Sindar, the Wood-elves. They made their home in Doriath. Their combination was a powerful one – her Maiar authority and wisdom, and his influence as the only Sindar who had ever seen the Two Trees. Under Melian’s teaching, the Sindar became the fairest, wisest and most skilful of the Elves of Middle-earth.

She had much foresight, and advised Thingol that the Peace of Arda would not last for ever. She then offered to teach the dwarves many things in exchange for planning and labour in building Menegroth. When completed, Melian filled the halls with woven hangings showing the deeds of the Valar and the history of Arda.

After Orcs assaulted Doriath after the killing of the Two Trees, Melian fenced her domain with an unseen wall of shadow and bewilderment that was known as the Girdle of Melian. No-one of lesser power than Melian could pass through it save those whom she or Thingol invited. It is said that within the Girdle, she had hallowed the waters of Tarn Aeluin in days of old.

Melian gave birth to Lúthien at the end of the First Age, and flowers of niphredil came forth from the earth to greet the child.

After the death of Beren, Lúthien came back to Menegroth, and the destiny that Melian had seen for her family from the minute Lúthien brought Beren to Menegroth occurred:

“Melian looked in her eyes and read the doom that was written there, and turned away; for she knew that a parting beyond the end of the world had come between them, and no grief of loss has been heavier than the grief of Melian the Maia in that hour.”

When the Noldor came to Middle-earth, Galadriel dwelt for a while in Doriath. Together Melian and Galadriel talked of the days of Valinor of old, and eventually Galadriel told the Queen of the rebellion of the Noldor and the Silmarils, but not the kin-slaying.

Melian and the race of Men

That Melian favoured men more than her husband Thingol was shown in her actions with Túrin, to whom she gave lembas sealed with the sign of the Queen – white wax shaped as a flower of Telperion. “In nothing did Melian show greater favour to Túrin than in this gift; for the Eldar had never before allowed Men to use this waybread, and seldom did so again.”

She also seemed sympathic to Húrin, exposing the depth of Morgoth’s enchantment to the man through the tone of her voice and the look in her eyes.

Melian’s return to the Blessed Realm

After Thingol’s death, a change came over Melian:

“It came to pass that her power was withdrawn in that time from the forests of Neldoreth and Region, and Esgalduin the enchanted river spoke with a different voice, and Doriath lay open to its enemies. … she vanished out of Middle-earth, and passed to the land of the Valar beyond the western sea, to muse upon her sorrows in the gardens of Lórien.”

Melian’s restlessness in Valinor is shown clearly in Morgoth’s Ring: “Melian, fairest of the Maiar, desiring to look upon the stars, went up upon Taniquetil; and suddenly she desired to see Middle-earth, and she left Valinor and walked in the twilight.” In some early notes, Tolkien mentions that she often leaves Valinor to wander the Hither Lands.

Melian was described by Tolkien as:
“Slender and very dark of hair … and her skin was white and pale, but her eyes shone seeming to hold great depths. Clad jet-spangled and girt with silver. If ever she sang or if ever she danced, dreams and slumbers passed over the heads of those that were nigh, making them heavy as it were with a strong wine of sleep.” Book of Lost Tales

Presumably her ability of to weave sleep dreams came from her association with Lórien. During her time on Middle-earth, Melian became as physically real in the world as the other inhabitants:

“Melian alone of all those spirits [Maiar] assumed a bodily form, not only as a raiment but as a permanent habitation in form and powers like to the bodies of the Elves. This she did for love of Elwë, and it was permitted, no doubt because this union had already been foreseen in the beginning of things, and was woven into the Amarth of the world.” Peoples of Middle-earth

In a very early manuscript, Galadriel entered Middle-earth with Melian, and in another early document, she became Melian’s handmaid in Doriath for a while.

Melian adorned the arched roof of the Hall of the Throne of Elwë in Menegroth with silver and gems set in the order and patterns of the stars of the Dome of Valinor.

The Valarin language was used in Doriath by the king, queen and a few of their household, according to The Lost Road.

Melian included Nivrim, the West-March, in her enchantment so that some portion of Sirion, which she loved in reverence of Ulmo, should be wholly under the power of Thingol.

After Beren’s death, Tolkien wrote several versions of the story of how Lúthien reclaimed him from Mandos.

“Some songs say that Lúthien went even over the Grinding Ice, aided by the power of her divine mother, Melian, to Mandos’ halls and won him back …though some say that Melian summoned Thorndor [Thorondor], and he bore [Lúthien] living unto Valinor.”

The etymology for Melian derived the name from mel- ‘love’.