~Samwise Gamgee~
"I know now, folk in those stories had lots of chances of turning back only they didn’t. They kept going, because they were holding onto something." 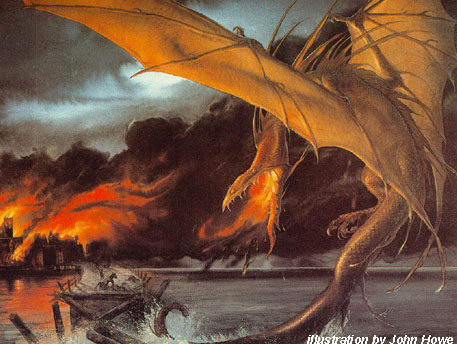 Originally from Ered Mithrin, “the grey mountains” north of
Mirkwood, the dragon Smaug coveted the great wealth of the dwarven realm of the Kingdom under the Mountain (Erebor). Smaug attacked the dwarves and drove them out, and also destroyed the nearby town of Dale.

For two hundred years Smaug guarded his fantastic hoard of gems, gold, and weaponry in the Lonely Mountain, as it had become known. Then Thorin Oakenshield, heir to the Kingdom under the Mountain, led a band of dwarves (along with the hobbit Bilbo Baggins) to take back what Smaug had stolen.
Using a secret entrance to the lower hall, Bilbo (rendered invisible by the One Ring) stole a golden cup and succeeded in ignited the dragon’s
rage. Smaug boasted to him, “My armour is like tenfold shields, my teeth are swords, my claws spears, the shock of my tail a thunderbolt, my wings a hurricane, and my breath death!” Despite his arrogance, Bilbo noted that there was a soft spot on the dragon’s diamond-encrusted chest.

Thinking that the men of nearby Esgaroth (Laketown) had aided the dwarves in their plot to retake the treasure, Smaug attacked the city but was slain by Bard the Bowman, who was warned about the dragon’s weakness and
was able to shoot a black arrow into a hollow patch under the left breast. The dragon fell and the lake became his watery grave.