It is unknown exactly when Gorhendad Oldbuck, head of the Oldbuck family, crossed the River Baranduin, or the Brandywine as the Hobbits called it. The River Brandywine was important as it was the original border of the eastern edge of the Shire. Gorhendad built (and excavated) Brandy Hall, changed his name to Brandybuck, and became master of his little land.

His descendants became the illustrious family of the Brandybucks. As the family grew and grew, the Brandybucks started building homes and burrowing holes in the land around. Soon the groups of holes and houses became towns, and that was the origin of Buckland – the narrow, but thickly inhabited strip of land between the River Brandywine and the Old Forest. 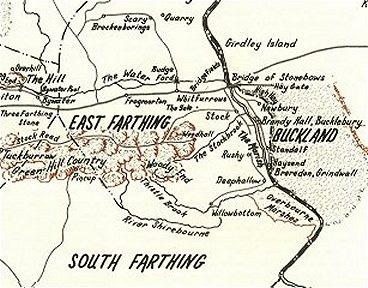 Many towns sprung up, e.g. Newbury, Crickhollow and Standelf, but the main town was Bucklebury, where stood Brandy Hall, the centre, and home, of the Brandybuck family.

The Bucklanders were quite friendly with the people in the Marish and the farmers of Stock and Rushey, but the rest of the Shire regarded the Bucklanders as strange folk, half foreigners. But really they were hardly any different than the rest of the Hobbits in the Four Farthings of the Shire, apart than the fact that they enjoyed swimming and boating on the Brandywine River.

The Bucklanders protected their land from the Old Forest by building a hedge, the High Hay. It was to protect the Brandybucks both from the terrors of the Old Forest, and any other evil things that dwelled outside their borders.The High Hay ran from the Brandywine Bridge to Haysend, spanning over twenty miles.

One of the most noted of Brandybucks was Meriadoc Brandybuck. He was one of the Fellowship of the Ring, sent out from Rivendell in the year c. 3019 to help his friend Frodo Baggins. Meriadoc and his friend Peregrin were captured by orcs and seperated from the Fellowship, and Meriadoc ended up swearing service to King Théoden of Rohan, and fighting in the Battle of the Pelennor Fields. In that battle he helped Éowyn defeat the Witch King.

When the One Ring was destroyed, Meriadoc and his companions returned to the Shire, and found that it had been transformed into another device of Saruman’s. Meriadoc and his friends then fought in their last battle, later called the Scouring of the Shire.

In the year c. 3032, Meriadoc became Master of Buckland. Years later, Meriadoc and Peregrin made their last journey during which they went to visit Éomer, King of Rohan, before carrying on to Gondor. There they dwelt until they died, and their graves were laid beside their good friend, and King, Elessar.