The First House of the Edain 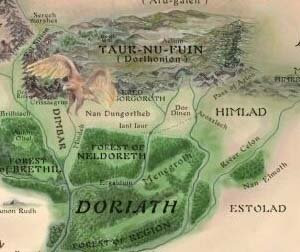 After Men awoke in Hildórien, Balan was the first leader of Men to lead his people over the Blue Mountains and into Beleriand. There they rested and sang songs of joy for they felt that they had escaped the evil that they had found in the north. They were sitting around a fire below the springs of Thalos, and there Finrod, the lord of Nargothrond, first heard them.

Finrod watched them for a time and a love for them stirred in his heart. Balan’s folk tended to be dark or brown haired and grey eyed. “Of all Men they were most like to the Noldor and most loved by them; for they were eager of mind, cunning-handed, swift in understanding, long in memory, and they were moved sooner to pity than to laughter.” Therefore Finrod watched them for a time until they had all fallen asleep. Then he went down to them, and he picked up Balan’s crude harp, and he began to play for them a song. Wisdom filled the hearts of Balan’s people as they awoke and they understood the words though they were not of their own language.

Balan’s people began to call Finrod Nóm, ‘Wisdom’, and they called his people the Nómin, ‘the Wise’. They believed at first that Finrod was one of the Valar of whom they had heard. The Lord of Nargothrond remained with Balan’s people for a time and he taught them many things and these Men took Finrod as their lord. The people of Balan were ever after loyal to the House of Finarfin. 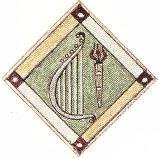 Soon, because the learning of languages was easy for the Noldor and because it was not unlike his own, Finrod was able to converse freely with Balan. They spoke long, and Finrod asked Balan about their coming into the world. Balan would say little because he knew little. The fathers of his people had made few tales about their early days in Middle-earth. All that Balan would say was that there was a darkness behind them and that they had turned away from it and toward the light. Balan also told Finrod that there were other groups of Men who were behind them on the road.

The Green-elves, in whose land Men had now come, were troubled by their coming. They spoke to Finrod and asked that he move the Men out of their lands. Balan moved his folk over the river Gelion and they lived in the lands of Amrod and Amras upon the eastern banks of Celon south of Nan Elmoth, near the lands of Doriath. These lands were called Estolad, ‘The Encampment’. 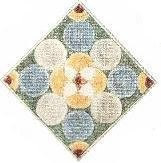 After spending a year with the Men of Balan, Finrod desired to return to his people. When he left, Balan went with him and served as his vassal and took the name Bëor, which meant ‘vassal’ in his language, and he served Finrod until the day he died. He left the charge of his people to his son, Baran.

Fingolfin, the High King of the Noldor, sent messages of welcome to the Edain. Many young Men went to serve the lords and kings of the Eldar.

The Edain became restless, and their thoughts were ever westward, so the three kings of the Noldor offered to the Edain that any who desired could come and live in their lands. So the migration of the peoples of Men began. The people of Bëor came to Dorthonion and dwelt in the lands of the house of Finarfin under their lord Boromir. Their land was called Ladros and Boromir was the first of the three lords there.

At last Bëor the Old died when he was 93 years old after serving Finrod for 44 years. “And when he lay dead, of no wound or grief, but stricken by age, the Eldar saw for the first time the swift waning of the life of Men, and the death or weariness which they knew not in themselves; and they grieved greatly for the loss of their friends. But Bëor at the last had relinquished his life willingly and passed in peace; and the Eldar wondered much at the strange fate of Men, for in all their lore there was not account of it, and its end was hidden from them.”

The years of the Edain were lengthened, according to the reckoning of Men, during their time in Beleriand. While there, they learned much of the Eldar and they became great friends and allies of them.

During the Dagor Bragollach, the people of Bëor fought alongside the sons of Finarfin who bore the brunt of the battle. Aegnor and Angrod were slain along with Bregolas, the lord of the people of Bëor, and many of his warriors.

Barahir, the brother of Bregolas, was fighting further west near the Pass of Sirion. Near there, Finrod had been cut off from his people and was surrounded. Barahir gathered many of his strongest warriors and they fought and saved Finrod with great loss of life. After this great deed, Finrod “swore an oath of friendship and aid in every need to Barahir and all his kin, and in token of his vow he gave to Barahir his ring.” This was the Ring of Barahir that Aragorn, son of Arathorn, wore during the time of The Lord of the Rings.

Barahir was now the lord of the House of Bëor, since his brother Bregolas’ death. He returned then to Dorthonion but some of his people fled to Hithlum. Morgoth’s power overshadowed the north, but Barahir would not flee. His folk who remained with him fought with the emissaries of Morgoth endlessly, until finally the Dark Lord sent many to assail them, and they pursued the folk of the House of Bëor to the death.

So desperate was the case of Barahir’s people that his wife, Emeldir the Manhearted, gathered all of the women and children and gave to them arms to bear, and she finally led them with much loss to Brethil. Some of their people were taken in by the people of Haleth, while others fled to Dor-lómin and were taken in by Galdor son of Hador. Two of those who made it to Dor-lómin, were Rian the daughter of Belegund and Morwen the daughter of Baragund.

Morgoth’s Orcs killed all of the people of Barahir until only he and twelve remained. They were Barahir, his son Beren, Belegund and Baragund (nephews of Barahir) the sons of Bregolas, and nine servants of his house whose names are remembered in the songs of the Noldor: Radhruin, Dairuin, Dagnir, Ragnor, Gildor, Gorlim the Unhappy, Arthad, Urthel, and Hathaldir the Young. They became like outlaws in the wild until finally they were utterly defeated save Beren son of Barahir only.

Glossary of the House of Bëor, The First House of the Edain:

Balan (Bëor) – first Chieftain of the First House of the Edain

Boromir – son of Boron, Lord of Ladros in Dorthonion

Belegund – son of Bregolas, father of Rían who married Huor. Rían is the mother of Tuor and the grandmother of Eärendil the Mariner.

2nd son Barahir – son of Bregor. Saved life of Finrod and the king swore an oath to always protect his people. Escaped slaughter in Dorthonion only to be betrayed by one of his companions and be killed by Orcs of Sauron.

Beren – son of Barahir. Only one of Barahir’s companions to survive. He made his way to Doriath and through the Girdle of Melian. There he met Lúthien and together they were able to gain access to Angband and there they recovered one of the Silmarils. Beren was killed and by the song of Lúthien to Mandos they were both allowed to return to ME and live the rest of their lives as mortal man and woman.

Dior – son of Beren. Heir of Thingol of Doriath. He ruled there as king until the sons of Fëanor killed him and his sons for the Silmaril.

Elwing – daughter of Dior. She wed Eärendil the Mariner (also descended from Bëor) Together they recovered the Silmaril and traveled to Aman where they were given the choice to remain immortal or to become mortal. They chose immortality and they remained in Aman or in the skies of Middle-earth.

All information compiled from The Silmarillion