~Frodo~
"Frodo’s face was fair of hue again, pale but beautiful with an elvish beauty, as of one who has long passed into the shadow." 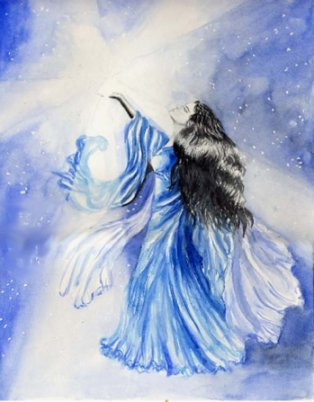 Titles: Lady of the Stars, Elbereth, Elentári (Queen of the Stars), Tintallë (Star Kindler), Gilthoniel, The Exalted, The Lofty

Attributes: Light and the stars.

Maia: Ilmarë – the handmaiden of Varda.

Home: The Halls of Manwë and Varda are above the everlasting snow, upon Oiolossë, the highest tower of Taniquetil.

– Rejected Melkor before the making of the Music. He hated her and feared her more than all others that Iluvatur made.
– If Manwë was with her on their thrones, Varda could hear more sounds from all the Earth than any other ears.
– Filled the Lamps of the Valar.
– Hoarded the dews of Telperion and the rain falling from Laurelin. From the dews of Telperion, she created new stars – brighter than those already there. She also gathered many of the ancient stars together and set them into constellations.
– Hallowed the Silmarils so that nothing of evil could touch them without being scorched or withered.
– Took the vessels of the sun and the moon and gave them the power to cross the lower regions of Ilmen, and she set them to voyage above the Earth from the West unto the East.