~Gimli~
"Yet my axe is restless in my hand. Give me a row of orc-necks and room to swing and all weariness will fall from me!" 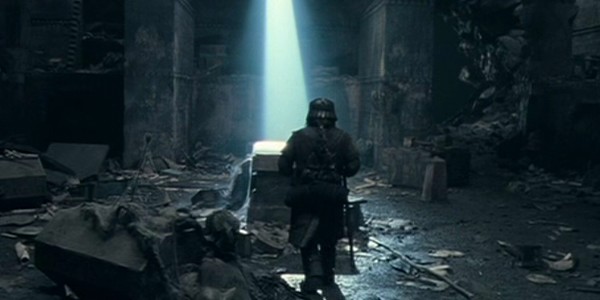 How did it happen in the movie?
When Gimli spots the Chamber from where he’s standing in the Great Hall, he immediately runs toward it. There he finds the tomb of Balin son of Fundin, his cousin, and corpses of slain Dwarves scattered all across the floor.
While Gandalf is reading from the book he found amidst wreckage, Pippin accidentally pushes a skeleton down the well he’s leaning against. Gandalf reprimands him, and all grow anxious when they hear drum signals somewhere underneath the chamber they’re in.
Then all of a sudden, Sam sees that Frodo’s sword glows blue. Boromir runs outside to check, and has a close encounter of the less pleasant kind with some Orc arrows. The door is barricaded, but as the Fellowship assumes a position to fight a horde of Orcs with a Cave-Troll in their wake enter the room. Followed by a fun-packed action sequence in which several attempts are made to kill the Cave-Troll and Boromir (who is rescued by Aragorn); and ends in Frodo getting stabbed and the Troll being shot in the throat by Legolas.
All is well that ends well: Frodo has survived the spear-thrust thanks to Bilbo’s mithril vest. 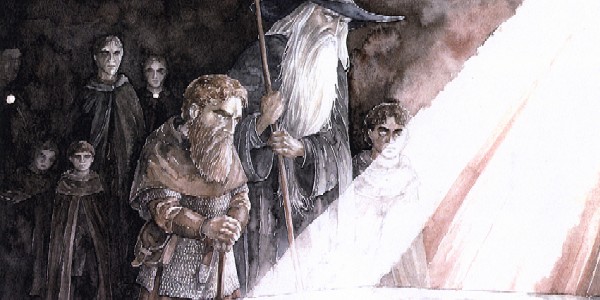 How did it happen in the book?
After a nice long rest in the Great Hall, Gandalf suggests they look for clues that can point them in the right direction. The first door they enter leads them into the Chamber of Mazarbul, where they discover Balin‘s tomb.
They also find a book with records there, and Gandalf reads portions from it. After hearing how the Dwarves were closed in upon, they decide to return to the hall; but at that very moment they hear drums and a horn-blast. Gandalf leaves the room to have a chat with the merry band of cave-dwelling cuties, and upon his return Boromir and Aragorn block the door to the hall, but this is breached by a great Cave-Troll.
After some quarrelling, Frodo gets stabbed by a great Orc chieftain, who in turn is slain by Aragorn.
There is little time for the Fellowship to ponder this miraculous event, because they flee the Chamber through the east door. Gandalf puts a shutting spell on the door but comes across some unexpected resistance: a foe of great might had entered the room on the others side of the door. The Fellowship then run down a long and dark flight of stairs and arrive in the first hall, where an unpleasant surprise awaits them.

Let’s take a look at the changes in this sequence more methodically:
– Gimli doesn’t simply take off on his own like he does in the movie; the entire Fellowship goes to search the room to determine which way out of the Twenty-first Hall will bring them to the Dimrill Stairs. There’s also no sobbing; Gimli only bows his head in respect. Boromir doesn’t place a comforting hand on his shoulder; however Legolas has to drag him away from the tomb when the Fellowship leaves the Chamber through the east door.
The book lies next to an open chest, and not in the hands of a dead Dwarf.
– The incident with the well takes place during one of the rests earlier on in the journey; where Pippin is attracted to a well in the ground and throws a stone in, which is answered by tapping signals.
The drum signals used in this sequence are also heard in the book: the Orcs that have assembled in the Twenty-first Hall carry drums with them, or so the Fellowship assume.
– The fight is barely worth mentioning: the only person who gets close to being injured is Frodo, who is stabbed by an Orc chieftain. After Aragorn cleaves said villain’s head with Andúril, the other Orcs run away in fear. The first one to enter the room is the Cave-Troll, and Frodo stabs him in the foot. Sam, fighting with his Barrow-sword and not a frying pan, has a nasty scratch on the head that will trouble him later; but he does kill his attacker.
– Although there is plenty of amazement about Frodo’s miraculous survival, there is no time to solve this mysterious puzzle. The Fellowship don’t return to the Twenty-first Hall (and straight into the arms of a small hundred Orcs) but leaves through the east door and via a flight of stairs. Gandalf puts a shutting spell on this door and is confronted with a mighty foe – we will only later find out that this is the feared Balrog. 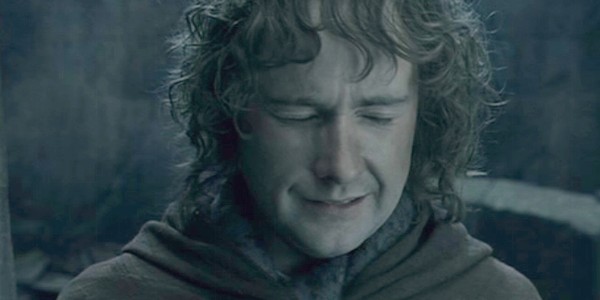 Mistakes
– In the movie, there’s no daylight in the Twenty-first Hall, and there’s hardly any daylight in the Chamber of Mazarbul. In the books however, several shafts lead into both the hall and the smaller room.

– The (two!) doors in the Chamber of Mazarbul are made of stone, not wood.

– The page that we see up close in the Book of Mazarbul is filled with Dwarvish runes. Although these runes are accurate and readable, this is incorrect: Gimli identifies the last person to write in this book as Ori, because he had the habit of writing in Elvish characters.

– Gimli takes the book with him.

– SilverDeath mentioned that it is very disrespectful of Gimli to stand on top of Balin’s tomb, and I’d have to agree that this is not just a change, but something that Tolkien would never have written.

– According to BondageOrc, Glamdring doesn’t shine white at all; and Sting doesn’t glow blue the whole time they’re in the Chamber of Mazarbul. Both swords should constantly, however, since they were both fashioned by the Elves and start glowing when Orcs are near – and Orcs can’t possibly be any nearer than when you fight them.

Borrowed Lines
– Gandalf’s ‘He is dead then. I feared it was so.’ was originally said by Frodo. [2.IV]

– When Gandalf reprimands Pippin for throwing the skeleton down the well, he uses the same wording as in the book: ‘Fool of a Took! This is a serious journey, not a hobbit walking-party. Throw yourself in next time, and then you will be no further nuisance.’
[2.IV]

– Boromir’s celebrated ‘They have cave-troll’ is borrowed from Gandalf who, when reporting of his meeting with the Orcs, says that there’s also ‘a great cave-troll I think’. [2.V]

– Gandalf’s ‘There is more to this Hobbit than meets the eye’, originally belonged to Bilbo who uses it after Frodo put on the mithril vest. [2.III] 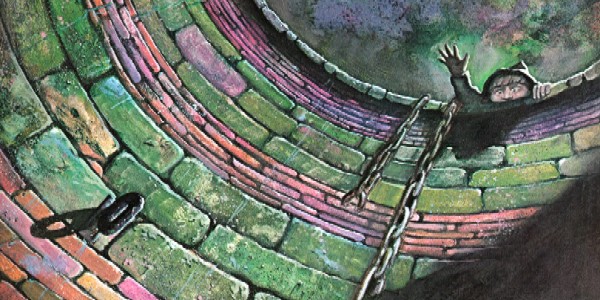 Some articles that are related to this sequence:
The Middle-earth Section has some articles on the Dwarves and the Family Tree of Durin's House.

You can see the Moria Theme here.