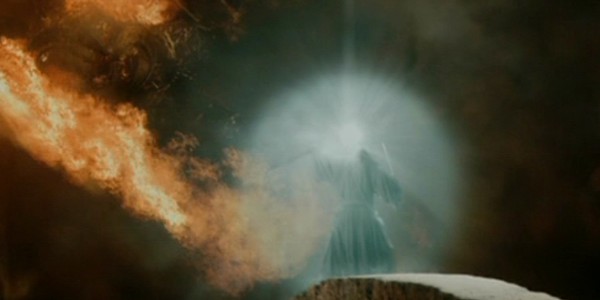 How did it happen in the movie?
After Frodo has survived the stab of the Orc-spear in the Chamber of Mazarbul, the company runs back into the great hall, in an attempt to make for the Bridge of Khazad-dûm. They find themselves surrounded by orcs crawling down the pillars like spiders, and jumping from holes in the ground – in short, it doesn’t look good. Until a great glow appears and the Orcs flee in terror. Gandalf identifies their new foe as a Balrog, and leads the company across a broken flight of stairs and to the bridge. Their he confronts the Balrog and conquers him, but with a last lash of his whip the great fiery beast pulls the old wizard with him on his fall.
There is much crying afterwards, especially from the side of the Hobbits, until Aragorn gatheres all companions and leads them to Lothlórien. 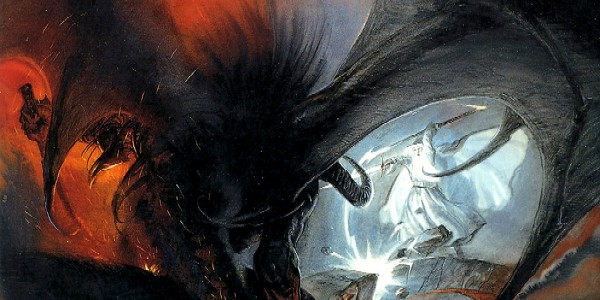 John Howe – The Bridge of Khazad-dûm

How did it happen in the book?
After the Fellowship shakes off an attack in the Chamber of Mazarbul, they make an escape through a door leading away from the arriving Orcs. Going down a long flight of stairs in the dark, they discover that Frodo, who was knocked unconcious after being attack earlier, is alive and well. Gandalf halts, letting the companions wait for him at the bottom of the stair, to confront a new foe that has arrived. He doesn’t know what it is, then, but he has to use some powerful spells to lock the door against it.
When they reach the first hall, they are confronted with it again and Legolas identifies it as a Balrog. While the companions make it across the bridge of Khazad-dûm, Gandalf confronts the large creature and succeeds in making it fall off the bridge into the precipice but is dragged down with it. Aragorn then leads the company through the hall to the East Gate, and slays an Orc chieftain on the side. After their narrow escape, there is little time to rest.

Though the main event, the fight between Gandalf and the Balrog, is precisely as Tolkien describes it, some changes evidently have been made to this scene in the movie:
– The Fellowship returns to the Twenty-first Hall in the movie, where they are surrounded by Orcs who only give way when the Balrog arrives. In the book, however, the Orcs march up with the Balrog, though they clearly fear it, and the Fellowship leaves the chamber through another door.
– It is not Gandalf who originally identifies the Balrog, but a not so heroic Legolas.
– All that exciting stuff on the stairs didn’t happen in the book. Also, no weeping and hugging outside the gate, though there is a certain amount of grief over Gandalf’s passing. It is Aragorn who leads the company out of Moria, not Boromir. 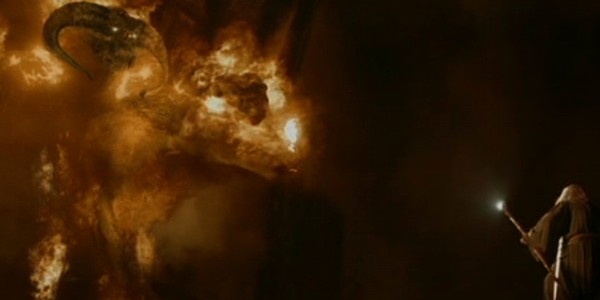 Mistakes
– I’m putting it here, because to some it may seem to be a mistake: the Balrog has wings. Tolkien doesn’t really say it has wings, just that ‘the shadow about it reached out like two vast wings.’ [2.V.] So there’s some quarrelling over that point amongst readers, but Jackson decided to make a Balrog that has wings as you can clearly see in this sequence, as well as in the opening sequence of The Two Towers.

Borrowed Lines
– Another title reference in this scene: Gandalf says ‘To the bridge of Khazad-dûm!’ after the Fellowship discovers they’re being hunted by a Balrog. ‘The Bridge of Khazad-dûm’ is the title of this chapter.

– Boromir’s ‘What is this new devilry?’ paraphrazes Gandalf’s ‘There is some new devilry here.’ [2.V.BoK] Gandalf answers this questions by saying ‘A Balrog.’ Legolas’ original response was a little more emotional: ‘Ai! ai! A Balrog! A Balrog is come!’ [2.V.BoK] The wizard continues to say that it is ‘a demon of the ancient world’. This line was used by Aragorn to describe to Celeborn and Galadriel what it was that killed Gandalf: ‘An evil of the Ancient World it seemed…’ [2.VII.MoG]

Bookie Details
– Despite the many changes made to this sequence, the confrontation between Gandalf and the Balrog is exactly as Tolkien described it, down to the words Gandalf uses to intimidate his enemy: The Balrog reached the bridge. Gandalf stood in the middle of the span, leaning on the staff in his left hand, but in his other hand Glamdring gleamed, cold and white. His enemy halted again, facing him, and the shadow about it reached out like two vast wings. It raised the whip, and the things whined and cracked. Fire came from its nostrils. But Gandalf stood firm.
‘You cannot pass,’ he said. The orcs stood still, and a dead silence fell. ‘I am a servant of the Secret Fire, wielder of the flame of Anor. You cannot pass. The dark fire will not avail you, flame of Udûn. Go back to the Shadow! You cannot pass.’
The Balrog made no answer. The fire in it seemed to die, but the darkness grew. It stepped forward slowly on to the bridge, and suddenly it drew itself up to a great height, and its wings were spread from wall to wall; but still Gandalf could be seen, glimmering in the gloom; he seemed small, and altogether alone: grey and bent, like a wizened tree before the onset of a storm.
From out of the shadow a red sword leaped flaming.
Glamdring glittered white in answer.
There was a ringing clash and a stab of white fire. (…) At that moment Gandalf lifted his staff, and crying aloud he smote the bridge before him. The staff broke asunder and fell from his hand. A blinding sheet of white flame sprang up. The bridge cracked. Right at the Balrog’s feet it broke, and the stone upon which it stood crashed into the gulf, while the rest remained, poised, quivering like a tongue of rock thrust out into emptiness.
With a terrible cry the Balrog fell forward, and its shadow plunged down and vanished. But even as it fell it swung its whip, and the thongs lashed and curled about the wizard’s knees, dragging him to the brink. He staggered and fell, grasped vainly at the stone, and slid into the abyss. ‘Fly, you fools!’ he cried, and was gone.

Some articles that are related to this sequence:
The Middle-earth Section has some articles on the Dwarves and the Family Tree of Durin's House.

You can see the Moria Theme here.