Fellowship of the Ring- The Complete Recordings

Description: Three disc set - includes music not heard in either the theatrical or extended version of Fellowship

Description: Inspired by the writings of JRR Tolkien - tracks run through the beginning of Fellowship of the Ring to the end of Return of the King.
Amazon Canada
Amazon UK

Description: This box contains the world's first complete musical interpretation of all the poems in Tolkien's masterpiece ''The Lord Of The Rings'' set to music by Caspar Reiff & Peter Hall. featuring 14 soloists including the world famous actor Christopher Lee, and more than 1500 professional musicians have taken part in this ambitious project which took ten years to complete, 112 page booklet with illustrations.

Description: Twelve themes from all three blockbuster films. Includes: The Prophecy, In Dreams, Concerning Hobbits, Many Meetings, The Black Rider, Gollum’s Song, Rohan, Evenstar, Forth Eorlingas, Into The West, The Steward Of Gondor and Minas Tirith.

Description: Twelve themes from all three blockbuster films. Includes: The Prophecy, In Dreams, Concerning Hobbits, Many Meetings, The Black Rider, Gollum’s Song, Rohan, Evenstar, Forth Eorlings, Into The West, The Stewart Of Gondor and Minas Tirith. Each book contains a carefully edited part that is appropriate for the Level 2-3 player and a fully orchestrated accompaniment CD. 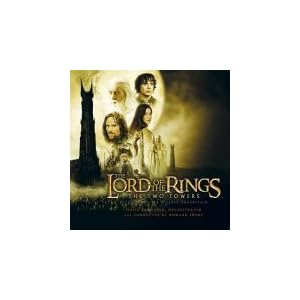 Lord of the Rings: Two Towers

Description: Order your copy of the TTT soundtrack! 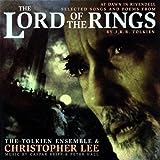 Description: this powerful collection has deeper roots, the third volume by composers Caspar Reiff and Peter Hall and their Tolkien Ensemble, an ambitious effort to bring Tolkien's Ring Poems to musical life.

Description: Twenty-two tracks of metal fused with just a hint of folk & classical music from this German power metal act. From the reviews section: "This is a concept album, based on JRR Tolkien's 'The Silmarillion'. There are several brief narrations along the way, that sort of aid you in following the story. This is especially helpful if you've never read the book." On a personal note, the 'Nightfall' track takes my breath away.

Return of the King Complete Recordings

The Fellowship of the Ring Movie Soundtrack Piano, Vocal, and Chords

Description: Book of music from the soundtrack- 28 pages Six selections from the blockbuster The Lord of the Rings, plus fantastic color photos from the movie! Includes: The Prophecy * Many Meetings * Aniron (Theme for Aragorn and Arwen) * Lament for Gandalf * In Dreams * May It Be.

The Lord of the Rings for Easy Piano (Paperback)

Description: Easy Piano songbook-48 pages Titles from The Fellowship of the Ring: The Prophecy * In Dreams * Concerning Hobbits * Many Meetings * The Black Rider. Titles from The Two Towers: Gollum's Song * Rohan * Evenstar * Forth Eorlingas. Titles from The Return of the King: Into the West * The Steward of Gondor * Minas Tirith

The Lord of the Rings Two Towers Complete Recordings

The Lord of the Rings: The Fellowship of the Ring - Original Motion Picture Soundtrack [SOUNDTRACK]

The Lord of the Rings: The Return of the King

Description: The much anticipated RotK soundtrack. Order your copy today!

The Return of the King Movie Soundtrack Piano, Vocal, and Chords

Description: Book of music from the soundtrack-56 page Arranged For Piano/Vocal/Guitar With Lyrics. Contains 7 principal movie themes, including the Annie Lenox single "Into The West"