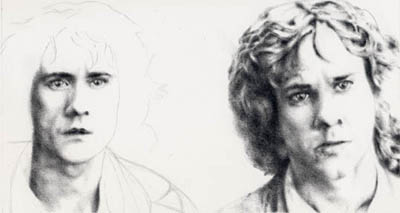 15) Well, it seems forever but I finally got the next part done on Pippin! As you
can tell, I’ve put the detail into his neck but I have yet to finish his hair and everything until I can fully finish the darks in his neck. In this particular shot of Pippin, the left side of his neck is exceptionally dark as well as that same side of his face, so that won’t be done till the hair is done. His face is going to go out a little more and his neck wont look so skinny either.
I don’t know if anyone noticed but I added just a little bit of extra detail in both Merry and Pippin’s eyes. Well, not quite the eyes but in that general region, can you tell what I added? It’s so slight but to me it made a load of difference. What I did was added some more shadow at the ends of both eyebrows where they meet at the top of the nose. Can you see it? All I did was emphasize the look of concern on Merry’s face and the look of confusion on Pippin’s. By furrowing their brows it really changes their expressions, not so much on Pippin’s yet but definitely on Merry’s. That’s something that’s really important when doing your own drawings, pay close attention to detail. No matter how small and insignificant it may seem it may make a HUGE difference. 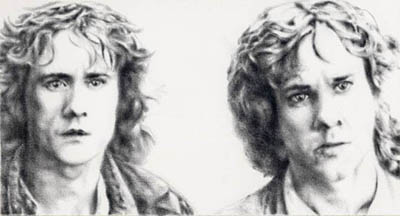 16) Alrighty then! I finally got the time to work on Pippin and now, as you can see, he’s done! Well, sorta, it’s never officially done till I get everything done like the background. I used all the same techniques with Pippin as I did with Merry, with the exception of Pippin’s clothes. Pippin’s clothes had much more detail in them than Merry’s did so it took a little longer to do that part.
This is something that I always do with my pencil when doing clothes: when I’m doing the shading from light to dark, I don’t move the pencil normally, instead, I actually move the pencil in a circular motion. It sounds funny but it works really well! By moving your pencil in a circular motion rather than back and forth you’ll get much better textures, and that’s great for clothing because clothing isn’t smooth like a person’s face – it has many different shades and bumps and what-not. I do this same technique with hair but not too much. Only in the dark regions do I do that, such as the right sides of the hobbit’s hair. Most likely with what I’ve done with Pippin, I’m going to end up darkening the right side, because it feels too light to me and I want the lighting to be a bit stronger. 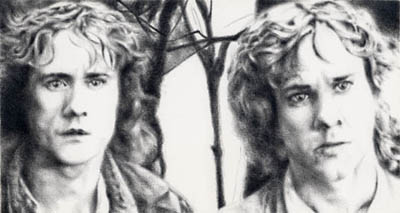 To the Background!!
17) Now it’s time to get ready and complete the drawing, and what better way that to actually put your characters in an actual space and not floating in white air! Well, you could lie and say that it’s snowing really hard or it’s foggy, but that won’t fool too many people. Often I find that my favorite drawings are those that have a nice background, because it gives the whole picture a presence and a life to it. The background can be ANYTHING that you want it to be! Such as with my drawing of Legolas looking off into the distance, that’s not at all the background that that scene was in; I changed it so that Legolas was in the forest instead of having the blurry horse and rider that was originally there. The same goes with this drawing of Merry and Pippin, yes, in the original picture they were in the forest, but it was so dark and blurry that one could hardly see it as that. So, what did I do? Why the same thing as with my Legolas picture, I changed it! Lucky for me, I live right next to a forest and I could easily look out my window and draw directly from life. If you want to draw something else in the background, I would recommend to do some searching and find images that you would want, but if you do that, try and make sure that the background matches somewhat what you’re drawing. Like don’t draw the hobbits waiting outside for a bus or something – try to make it look natural.
Ok, when doing the background, treat it like you did with the rest of the drawing. I used all 4 pencils so I could get a wide variety of lights and darks. This is important because you want the background to do just that, sit in the back. You still want your characters to pop forward and not blend into the background too much. What I often do is make the areas around the characters a touch darker, which will automatically bring them forward, but I also blend the hair in a bit so that it still makes them one with the picture. Otherwise they will look like they were simply cut and pasted onto your paper. Now, when I’m doing the background I almost do the opposite of what I did with the rest, I put the darks in 1st! Like above, you can see that the dark branches are already in there but I have yet to put in the rest. Just like with the hair, go nuts in the background! You don’t have to make it perfect. Especially when it comes to drawing nature, nothing is perfect, no prefectly straight lines, no perfect circles, etc. Oh, I don’t know if people noticed, but I darkened Pippin quite a bit and I think it looks better. It also helps him sit with the background. 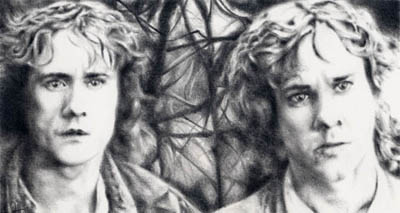 Drum Roll Please!!!
18) The drawing is done (LOTR theme music plays in background)!!! Whew, it’s been a long ride hasn’t it, but it’s complete and I can take a sigh of relief.
With the now finished background, you can see that there’s many layers, and that’s key when drawing a forest of trees. Layer Layer Layer!!! If you were to look out into the woods, you’d have branches right in front of you and then some in the middle and then some in the far back, and you want to be sure you show that. When drawing things in the foreground, make them the darkest – the closer they are to you, the darker they will be. As you go further back, start making things gradually lighter. By doing this you’ll get a sense of space and it will look more 3D. With this picture in particular, since Merry and Pippin are in Fangorn Forest I put everything close together so it looks entagled and close and almost confusing. It supposed to be a metaphor almost in that they are confused about which path to choose and are trying to work their emotions out. Whether to simply take the easy road and go back to the Shire or take the more dangerous path and go and help their friends. I added a touch more light into the tops of the trees because if I were to make it too dark, then I would lose some attention to the background. I want the background to get attention, but not too much, so I very lightly put some shading in the top there.

Well, that about covers it! You have now witnessed how I do my drawings and how to go about it and do one on your own as well! Now for one of the #1 questions asked to me by people: How long did it take me to do this drawing? It’s pretty hard to say exactly because I work on my drawings off and on but this specific drawing probably took me about 8-9 hours, give or take.

*I just want to add that I am in no way a professional instructor. These are the techniques that I personally have learned over the years through doing my own drawings and other artists might teach something completely different.
So, in other words, I’m just a young college student who is teaching everyone what I have taught myself and I am not a licensed instructor.