~Celegorm~
"...a hunter also was Celegorm, who in Valinor was a friend of Oromë"

“Mab” Suffield was a slim, good-looking girl from King’s Heath, Birmingham. She was a clever, knowing good Latin, French and German, as well as being able to paint and draw. Her piano playing was exceptional.

She became engaged to Arthur Tolkien at 18, but her father would not permit a formal betrothal till two years later. Until then, the lovers had to exchange letters in secret and have clandestine meetings at evening parties.

In March 1891, Mabel set sail for South Africa on the SS Roslin Castle to meet Arthur, who had gone on there ahead of her. She was 21. They were married in Cape Town Cathedral on the 16th April 1891. Mabel didn’t like Bloemfontein. She thought the park “no more than about 10 willows and a patch of water” and described the area as an “Owlin’ Wilderness! Horrid Waste!” in a letter back home. She hardly saw Arthur, who was busy at work for most of the day, and she missed the excitement of life in a big city. 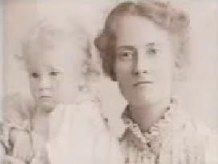 But under all that, she loved Arthur greatly and greatly enjoyed the small bits of time they spent together. On the 3rd January 1892, John Ronald Reuel was born. He arrived into the world early, but Mabel found it an easy birth. A year after the new arrival, Mabel’s sister, May Incledon, arrived to stay for a while with the family. Finally, Mabel managed to get someone to whom she could pour out her irritations with the climate, the natives, the endless parties, the endless social calls.

On the 17th February 1894, Hilary was born, and in the November of that year, she took the boys to Cape Town for health reasons. Tolkien was always a sickly child, and she thought that the air of the Cape would be better for him than the hot desert environment. Another step was taken when she decided to return to England with the children in April 1895. That would be the last she saw of her beloved Arthur. The Tolkiens left South Africa on the SS Guelph, and were met in England by Jane Suffield.

Their life in England would be hard. Mabel was left around 30 shillings a week from Arthur’s savings to care for herself and the boys – only just about enough to manage even at the lowest standards of living, and for the first year, the family lived with her parents in King’s Heath.

In 1896, she finally found somewhere for them to live – 5, Gracewell, a semi-detached brick cottage in Sarehole, perched at the end of a row, and rented from a local landowner. The situation was delightful. Over the road was a meadow leading down to the River Cole where Sarehole Mill stood. There were only a few houses in the village apart from the Gracewell row, but Hall Green village lay only a short distance away down a country lane, and that had at least some local amenities.

When at Sarehole, Mabel began to teach her two sons writing, reading, languages, art and botany. She also gave them lots of storybooks to fire their imaginations.

Christianity started to play an ever more important role in her life after Arthur’s death. She started going to a High Anglican church, but then she started to think about Catholicism. In spring 1900, she took what was to her family a shocking step – and started to receive instruction about the Catholic faith with her sister May at St Anne’s, Alcester, in the slums near the centre of Birmingham.

Since her husband’s death, she had been receiving financial aid from Walter Incledon, but when she decided to become Catholic, that ceased. She also started facing hostility from both the Suffield and Tolkien families. However, she was a determined lady, and she simply added to her so-called sins by starting to ‘instruct her sons in the Catholic faith.

That same year, the family moved to Moseley, conveniently situated on the tram route to Tolkien’s school. Their new dwelling was a small, drab, house with views only of trams, factories and unsmiling faces. Their stay there, however, was not to be long, as almost as soon as they moved in, Mabel was told that the house was scheduled for demolition. She then found a villa less than a mile away, in a terrace behind King’s Heath station, in the same road as a new Catholic church, St Dunstan’s.

But Mabel still was not satisfied, and she moved the family again, to Edgbaston, where they found a house near the Birmingham Oratory. It was at 26, Oliver Road, and the house was little more than a slum. The main attraction for Mabel, however, was that next door to the house was the Catholic Grammar School of St Philip, which provided cheap education, and which was associated with the Oratory. There, the family met Father Francis Xavier Morgan, the parish priest. He soon became a firm family friend, and an indispensable part of their life. In Edgbaston, she started to teach her boys again, but soon Tolkien started to attend St Philips, and Mabel was left only with Hilary. 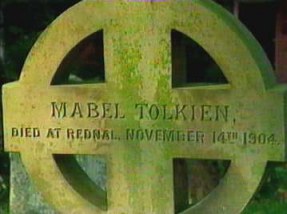 In April 1904, the strain of keeping her family in such conditions and the worry of nursing the boys through various illnesses was beginning to show, and Mabel was sent to hospital, suffering from diabetes. She recovered enough to be discharged in the summer, and she was given a cottage to recuperate in by the Oratory. It was in the small village of Rednal. The boys went to live with her there during the summer holidays, but went back to school in Birmingham in the autumn.

She deteriorated again in November, ending up in a sudden diabetic coma. Six days later, on the 14th November 1904, she died with Fr Francis and May at her side.

Mabel was buried in the Catholic churchyard at Bromsgrove, and Fr Francis provided a cross for her headstone – the same design of stone cross as was used for the Catholic clergy in the Rednal cemetery. She left £800 of invested capital, and appointed Fr Francis as guardian to John and Hilary.