Race: descended from the Maiar

Shelob the spider was the daughter of Ungoliant, who helped Melkor destroy the Trees of the Valar. Her existence probably began in Beleriand’s Nan Dungortheb, “the Valley of Dreadful Death”, where Ungoliant had lived after parting from Melkor.

Shelob eventually relocated to the Shadowy Mountains (which formed the western border of Mordor), and her home was known as Torech Ungol, “Shelob’s Lair”. Although she did not directly serve Sauron, the Dark Lord found her to be a very useful ally, as no Man or Elf had ever crossed through Cirith Ungol, “the Spider’s Pass”. Sauron occasionally sent prisoners to their doom in her webs, and she supplemented her diet with unfortunate Orcs who passed too close to her lair.

She was armed with venom and iron claws, and her webs were strong as rope. No part of her thick-skinned body was vulnerable save her clustered eyes. 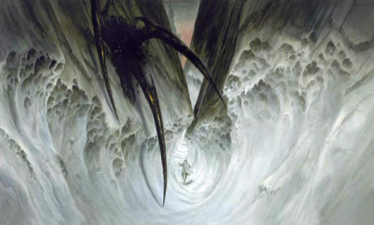 Gollum led Frodo Baggins and Samwise Gamgee into Cirith Ungol in the hopes that Shelob would kill the hobbits and allow Gollum to reclaim the One Ring. Shelob stung Frodo but Sam leapt to his defense, bearing the sword Sting and the Phial of Galadriel, which held the Silmaril-based light of Earendil. Sam attacked Shelob’s eyes, and when she tried to crush him, she only impaled herself on Sting.

Defeated by a hobbit, and mortally wounded, Shelob retreated back into the deep caves of Torech Ungol and was never seen again.