Father of Legolas and Son of Oropher, Thranduil was a Sindar King most probably descending from the line of Thingol of Doriath. He was the King of the woodland realm in Northern Mirkwood, and he claimed his throne after the War of the Last Alliance resulted in his father’s death. When Aragorn found Gollum, he gave him to Thranduil to hold in prison but orcs attacked and he escaped. 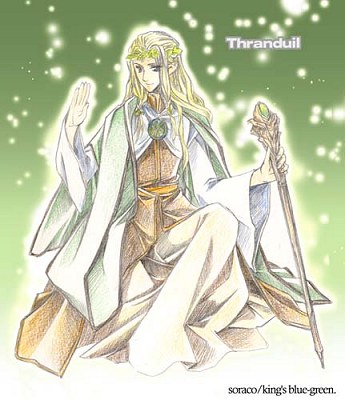 In his hand Thranduil held a carven staff of oak, and his crown was ever changing, made as it was by leaves and berries of the season. Thranduil had a special liking and taste for white jewels and silver.

Battles that he fought in

He fought in the War of the Last Alliance, the Battle of the Five Armies and the Disaster at the Gladden Fields.

In the War of the Last Alliance, he fought alongside his father as his father rushed ahead, not heeding the commands of the High King, Gil-Gilad. The Silvan Elves lost many men and Oropher was slain. Only one-third of their army came back with their new king Thranduil.

He also fought in the Disaster at the Gladden Fields. When Isildur and his sons were coming back from the campaign of the Last Alliance, he was attacked by orcs and quickly become outnumbered. When Thranduil heard of this he brought some elves to help them, but to little avail as eventually all the men were slain.

During the War of the Ring, the woodland realm was attacked by orcs, but Thranduil successfully fought them off. When Sauron was defeated, all of Mirkwood was cleansed, and he renamed it Eryn Lasgaen.