~Eomer~
"Saruman has poisoned the mind of the King and claimed lordship over his lands. My company are those loyal to Rohan, and for that we are banished."

Only son of Huor and Rian and cousin of Turin Turimbar. Conceived just before Huor died in the Nirnaeth Arnoediad (The fifth and most disastrous battles of the Wars of Beleriand) , Tuor was fostered by Annael, a Sindar of Mithrim, for Rian his mother died of grief soon after his birth. Tuor spent his childhood in the caves of Androth (located in the Mountains
of Mithrim) , but when he was sixteen the Sindar were captured while trying to flee to the Havens of Sirion (the port and refuge at the mouths of the Sirion river). 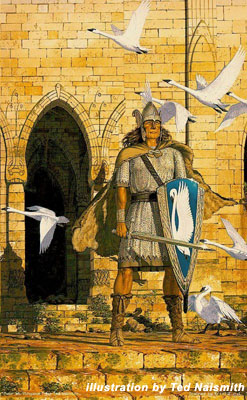 Tuor was enslaved by Lorgan the Easterling (Also called Swarthy Men who entered Beleriand from the East in the time after the Dagor Bragollach, and fought on both sides in the Nirnaeth Arnoediad they were given Hithlum as a dwelling-place by Morgoth, where they oppressed the remnant of the People of Hador), but he was able to escape. For four years he dwelt alone in Androth (Caves in Mithrim) as an outlaw, doing great harm to the Easterlings.

The Valar, Ulmo had long ago chosen Tuor as his instrument, and the Valar prompted him to go in secret to Nevrast (the costal lines of Beleriand), where he found the sword and armour left there nearly 400 years earlier by Turgon (The founder of the hidden city Gondolin). Ulmo then instructed Tuor to go to Gondolin to send a message of warning of Melkor discovering and attacking Gondolin , giving him a cloak of shadow and a companion of the Gondolindrim (the Elves of Gondolin), Voronwe. Bearing the tokens of Ulmo, Tuor gained admittance to Gondolin, where he delivered the message of warning given to him by Ulmo. But Turgon in his pride refused to flee from Gondolin, and Tuor remained there, growing strong in body and wise in Elven-lore. Tuor married Idril the daughter of Turgon, and the following spring their only child, Earendil, was born.

When Gondolin was overrun by Melkor, Tuor rescued Idril and Eearendil from Maeglin (Turgon’s nephew who was in love with Idril he had been captured by orcs and had to betray the realm to Melkor who had promised him Idril’s hand in return), whom he slew, and with Idril led the remnant of the Gondolindrim
to the Havens of Sirion. Tuor had yearned for the Sea ever since being led to Nevrast by Ulmo, and in his old age he and Idril sailed to the West in his great ship Earrame. Their fate is unknown, but it is said that Tuor was admitted to Eldamar (the land of the Eldar), the only mortal Man to be numbered along the Eldar (the three kindreds of Elves).